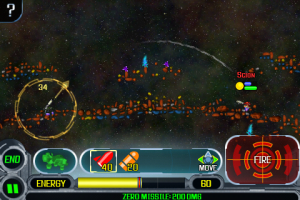 Star Hogs [App Store] saw a price drop to $2.99 this morning, and IUGO has plans in the works for two updates, one of which has already been submitted.

We first saw Star Hogs at WWDC, and when we finally got the game in to our hands, it was just as good as we expected.

Star Hogs is less of a Worms clone, and more of an evolution of Worms-like turn based combat. The variety of options for ships, 32 single player levels, free play (which is basically just online play but with AI or human opponents sharing the same device), and the potential of online multiplayer makes for a solid title that can easily hold its own amongst the other $4.99 games on the App Store.

Star Hogs Lite [App Store] is also available, and if you ever enjoyed a Worms game in the past, you owe it to yourself to at least give the free version a try.

Only now, instead of $4.99, Star Hogs is $2.99. The update which has already been submitted to the App Store addresses some online game balance issues and fixes a few bugs. The next update coming down the pipes features improved graphics, in-game messaging for multiplayer battles, and an optional purchasable map pack which will bring 32 new campaign levels.

IUGO’s Sarah Thomson has been extremely active in the Star Hogs thread on our forums and is collecting community feedback for future updates. So if you have comments, questions, or other ideas for Star Hogs, don’t hesitate to post them.