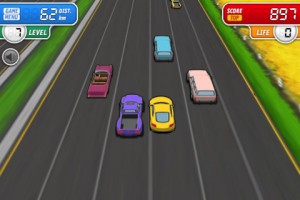 The gameplay is simple: you drag your finger to control your car while passing other cars in your way. Cars are moving at different speeds so you have to react quickly to maneuver around them. The game is nicely presented with all the zooming-by sound effects that you’d expect from a high speed racing game. The goal of the game is to accumulate the highest score which can then be compared against a global leaderboard. Higher score comes with both distance as well as bonus points for “extreme and fast" driving. The game offers both “normal" and “hard" difficulties.

Despite the simple game mechanism, I found myself riveted to the screen looking out for oncoming cars and getting particular satisfaction when just swerving to avoid a collision. While I’m very much enjoying my time with it, the gameplay may be too simple for some as dodging cars is the extent of the game without any other obstacles or goals — so it’s a pure reaction game. Still, at only $0.99, it fits in well with the other fun casual games that the App Store has had to offer and I recommend it.

Check out the developer’s video: