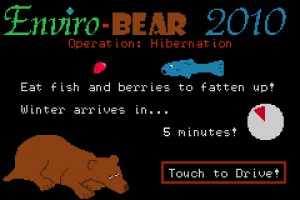 I like to think of my mental awesome-o-meter, that is, the gauge I use to determine how awesome a game is as something similar to one of those really old analog pressure gauges you might find on a submarine somewhere. Every so often a game comes along that is just so terrible that the ol’ awesome-o-meter goes so far in to the red that it comes back up on the other side. Enviro-Bear 2010 [App Store], my friends, is a game which causes this phenomenon.

Yes, Enviro-Bear 2010 is a bear driving a car simulator where you have five minutes to fatten yourself up and drive to your cave in preparation for winter. The controls are hilariously awful, and while the iPhone may be capable of multi-touch gestures, as a bear driving a car you only have one free paw which is what you use to drive around and scarf down food. 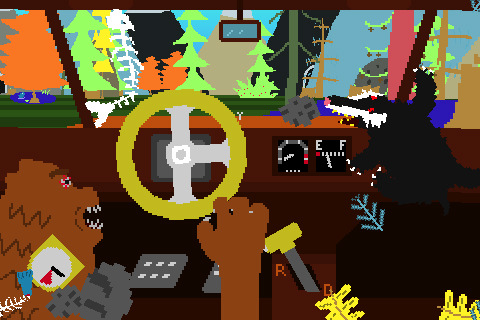 You can use your single paw to do all kinds of things, from putting the car in to drive or reverse, throwing just about anything (including the clock tracking your remaining time) out the window, and defending yourself from badgers. The driving controls provide as realistic of an experience as I can imagine if I were a bear driving a car, since you can either steer or use the pedals. With only one paw, how could you both at the same time?

It wasn’t until I played the game through a few cycles of winter that I started to realize the depth of how much you can interact with the world. Such a seemingly terrible game at first glance really has a odd level of detail, especially when you start thinking outside the box, or rather– Thinking like a bear, driving a car. 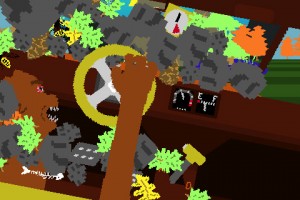 For instance, the horrid combination of constantly switching between the gas and steering is completely remedied by something so simple that it hadn’t even crossed my mind until I saw someone mention it in the thread on our forums. If you ram your car in to a boulder, a piece of rock will fall off, and you can use that rock to hold the gas pedal down.

Enviro-Bear 2010 is filled with all kinds of really weird functionality of interaction between objects that you never would expect. This realization transformed the game for me from a comically bad driving game to a clever, imaginative, and strangely enjoyable experience. (And I’m not the only one).

If you are looking for a completely ridiculous game with graphics so bad that they’re good and really awkward bear-inspired controls, look no further than Enviro-Bear 2010. Sure, you could buy better things for a dollar, but do those things involve a world where bears drive cars?

I didn’t think so.