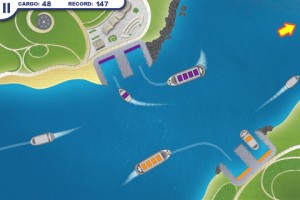 Imangi Studios has released their latest game into the App Store: Harbor Master [App Store]. This $0.99 chaos management game can really only be classified as an unabashed Flight Control clone.

Like Flight Control the game involves the use of the swipe gesture to safely guide your boats (planes) into their docks (landing strips). Imangi’s version does do justice to the gameplay mechanic and adds a number of nice twists to make it interesting.

Besides successfully docking your boats, you must also wait until they unload their cargo and then safely guide them out — all while avoiding hitting other boats. The situation can get relatively manic quickly requiring you to move some ships into holding patterns while waiting for a dock to free up. Larger boats move slower and also have more cargo to unload. In one of the three included maps, a cyclone can even send your ships off track which adds another dimension to the game. Online leaderboards allow you to see how well you’ve done on each of the three available maps.

The video shows the gameplay. From 13s to 30s it shows a sped up “time-lapse" version of the game while the later video shows actual gameplay speed:.

The game is very well put together and feels “right". I suspect there are those that will prefer Harbor Master to Flight Control and vice-versa, but for only $0.99 it’s certainly not a gamble if you already love the genre. It already seems to be a hit amongst our forum early adopters.