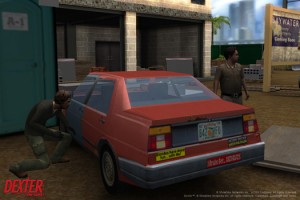 Readers may remember that we had originally met with Marc Ecko Entertainment back at GDC in March.

At the time, we got the first look at the upcoming Dexter game based on the Showtime television series. As we said before, the game tries to remain very true to the show with close tie-ins to the first season as well as the involvement of one of the show’s writers and Dexter actor Michael C. Hall.

We met with the company again at E3 and found that the game was still scheduled for a summer completion and that the game is said to be about 80% feature complete and 60% content complete. Much of the gameplay is similar to our earlier video, though a lot of work has been done on the UI, tutorial and cut scenes. This gameplay video shows the “kill room" which we didn’t show much of before:

The company also released new screenshots of the game.:

The game is expected this summer ahead of the next season of Dexter.