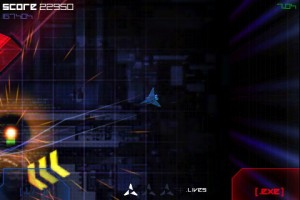 Chillingo and developer h.grenade have provided TouchArcade with the final build of the much anticipated space shooter Circuit Strike One.

We recorded this first hands-on gameplay video that shows the game in action. Those with just casual familiarity with the game might think that the game looks like many of the multi-directional survival shooters that have recently invaded the app store. Developer Shay Casey explains, however, that the game is actually a zero-g physics game much like Asteroids.

The real key can’t be said enough – it is a zero-g physics game just like Asteroids so do not try and keep your thumb on the thrust.

Casey says that once you get used to the controls there is a great payoff “allowing maneuvers like strafing, 180 degree j-turn style attacks and more. …. Once you get the hang of it and the controls “click" for you it opens up a world of possibilities."

The game also features an Airbrake, Reverse Thrust and an invincible “Bullet Time" mode. Our skills aren’t up to speed quite yet (as you can tell in the video), but the game looks great and you can get a feel for it through this hands on video (played on an iPhone 3G):

Circuit Strike One has been submitted to the App Store and is due any day now. We’ve been following this one for some time, and glad to see the release is almost upon us.