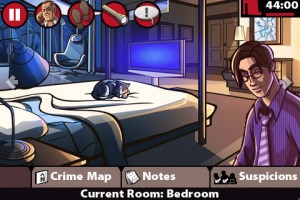 Following today’s theme of major new releases, EA has released Clue to the App Store [$4.99]. Clue was originally a board game that was later made into a movie. It’s since spawned a number of spin off games and video games including EA’s release today.

Clue is a murder mystery game in which you search for clues, question suspects and make accusations to solve the case. You play the role of an aspiring crime reporter guided by your newspaper editor. Based on the evidence you gather, you try to pick out the killer and see if you’re right.

The gameplay is straightforward and as you interact with other characters, options will appear in the form of questions to be asked or statements. Arrows show areas where you can move to as well as visual cues highlighting different tasks. There are alternate endings depending on your deductions, and the achievement system helps with the replayability. …. Clue is a well-designed and presented game for the platform.