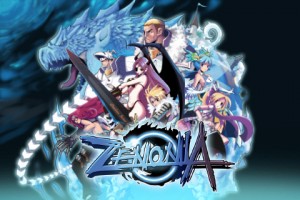 Few iPhone games have been as highly anticipated as Gamevil’s latest epic RPG, Zenonia [App Store]. Our forums have been swarming over it since we first caught wind of the game at GDC ’09, and things only got worse as the beta started and its App Store release approached. But does Zenonia live up to months of hype? There’s no question it stands alone in providing over 40 hours of faithful 16-bit era action RPG gameplay, but Zenonia certainly isn’t perfect.

I’m reluctant to spoil too much of the plot, but it touches on several RPG cliches. You play as a mysterious child unsure of his identity in an adventure that takes place during a conflict between the Dragon Clan and Holy Knights. Along the way you’re able to make choices that change both your alignment and the direction the game takes through the story. Non-Player Characters (NPCs) are plentiful, and even insignificant characters often have amusing things to say if you talk to them enough times. Grammar mistakes are abundant in Zenonia’s English localization, but more often than not I felt these just added to the humor of the game. 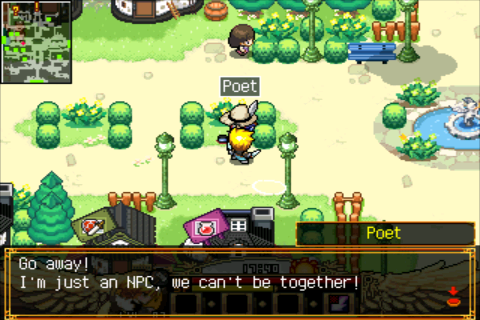 It’s nothing we haven’t seen before on other platforms, but Zenonia brings welcome change to the App Store in providing  an insane level depth that most games seem to lack. Ironically, it’s this same level of depth that will most likely leave casual gamers either frustrated or taking a pass on Zenonia entirely. 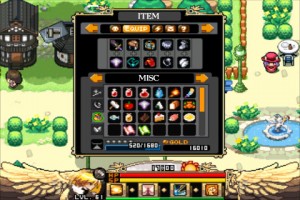 Zenonia comes packed with an item and character upgrade system unlike anything I’ve played on the iPhone. As you gain experience by completing quests and killing monsters, you’re able to increase your statistics as well as spend points making your way down skill trees very similar to talent trees in games like World of Warcraft or Diablo which can grant both active abilities and passive bonuses. Abilities can be assigned to the action bar on the bottom of the screen to quickly have access to them, and after leveling up and spending points to gain a few different skills, combat actually stays pretty fresh instead of just mindless button smashing.

The depth of Zenonia continues as you complete quests in a game world that has both day and night cycles, allowing for quests or quest objectives that only appear at certain times of day. There are ten different slots for your character to equip gear in, a ridiculous amount of potions, power-ups, and a detailed magic item upgrade system that focuses on combining items to create more powerful ones.

Items degrade over time, requiring repairs, and your character even needs to eat regularly. While I suppose these things could aid the immersion of hardcore RPG gamers, it seems like they just serve as a needless time and gold sink. You can pick up five quests at a time, and most quests will generally have you heading to the same area, but more often than not you have to run back to town to eat and repair before you can complete all quest objectives. 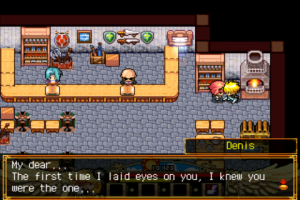 On top of this, there are several points in the game where grinding is absolutely required to earn enough experience to be a high enough level to stand a chance in the next area. Experience points usually come quick, and while the combat is generally fun, grinding still feels like an unnecessary chore rather than an entertaining gameplay element.

Zenonia is controlled using an on-screen D-Pad and buttons, similar to other Gamevil games and I honestly feel this is the game’s biggest flaw. Absolutely everything in the game is controlled using the virtual D-Pad, including navigating menus. It’s no secret that Zenonia on the iPhone is a port of an extremely popular Korean cell phone game built with cell phone hardware in mind, I just wish Gamevil would have made some attempt to (for lack of a better term) make the iPhone iteration of Zenonia a little more iPhone-y. 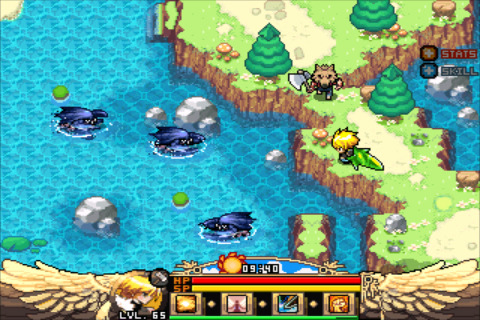 It seems extremely archaic to navigate through the various submenus that make up your character’s information, inventory, equipment, and skills, especially after seeing how Underworlds [App Store] handled this so well using a touch interface. Saving your game is also done using these same submenus, which seems really unnatural for an iPhone game. 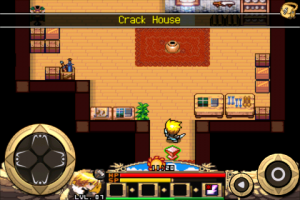 Your character also can’t move diagonally, which is a major pet peeve of mine, and I felt the controls took an awful lot of getting used to. Zenonia would be many times more enjoyable to play if instead of a rigid Up/Down/Left/Right D-Pad it controlled more similar to iDracula [App Store], allowing you to move in any direction. Even after having hours of gameplay clocked in to Zenonia I still find myself occasionally moving in the wrong direction or accidentally dashing forward. Thankfully, tapping the attack button will always make you face any monster in range of your character so the clumsy D-Pad doesn’t hinder combat that much.

The graphics are excellent, and it’s not hard to draw visual comparisons between Zenonia and classic 16-bit RPG’s. Combat animations are colorful and often come with screen flashes and other fun-to-watch graphical effects. Since the game weighs in at under 10MB, music and sound effects are fairly limited. The combat sounds get repetitive quick, and while there seemingly is a large variety of music, most of the tracks consists of loops that only last a few seconds.

So do I recommend Zenonia?

At $5.99, it is an unbelievable value for the amount of gameplay you’re getting. At over 40 hours per play-through, three classes, along with the good and evil alignment system, Zenonia should provide for at least a second fresh play-through as you choose the opposite alignment of your previous game. There really isn’t anything like it on the App Store, and if you’re looking for a solid RPG to settle in and sink your teeth in to, look no further than Zenonia. 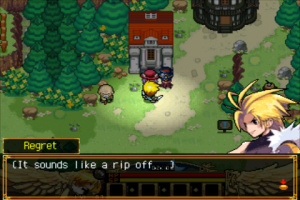 However, if you consider yourself more of a casual gamer and only play iPhone games in short bursts, chances are you won’t get very far in Zenonia. The game’s objectives revolve around accepting and completing short quests, but needless tasks like equipment repairs and character hunger along with required grinding between areas will likely grow tiring for the casual gamer long before you get close to completing the game.

Gamevil has already submitted Zenonia 1.1 to the App Store, and they’ve proven in the past that they’ll continue improving a game until they get it right. Baseball Superstars [App Store] has gone through an amazing transformation through updates, and I expect Zenonia will do the same. Despite my criticisms, as a fan of more classic RPG’s than I can even list, I’m enjoying Zenonia immensely.