The company has previously released a tower defense game called Crystal Defenders. While the first version of that game received a lot of criticism for a poor interface, many of those who stuck with the game claim it is one of the best tower defense games in the App Store. Crystal Defenders has since been updated to version 2.0 which addresses the awkward interface issues of the original release.

Their latest release Vanguard Storm continues to use the Final Fantasy characters/jobs but introduces it in the latest of their “defensive simulation" games. 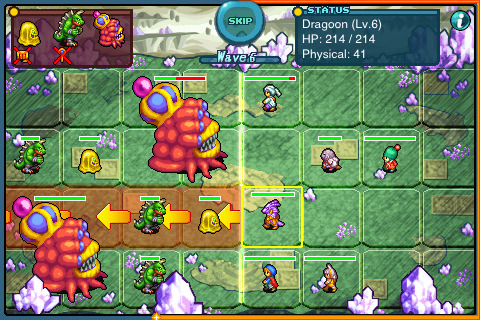 The game is presented on an 8 by 4 board and divided down the middle. Your mission is to defend your half with a specific set of characters with their own strengths and weaknesses. The attacking units come in from the left and are trying to cross your side. If even one of the enemy makes it all the way past your half, then the game’s over.

Your team of defenders are made up of characters with different abilities: soldiers can only attack the space in front and front-diagonal to their position. Archers can shoot distance but only diagonally. Black Mages can do range damage in the four spaces ahead of them. Later in the game, non-combat characters need to be used to assist. These include those that can heal nearby characters or augment their attack abilities.

Gameplay is turn-based and involves rapid shuffling of players around on the board to position their attacks most efficiently while also avoiding incoming damage. Each character has a number of hitpoints represented by a health bar above them. A character can be killed which handicaps you for that wave only. The game is divided into 10 locations on a map with multiple waves each. Successfully defending against all the waves allows you to progress to the next map location.

The best feature of the game is the easy pick-up-and-play nature. Many turn-based strategy games can have an intimidating learning curve, but this one can easily be picked up by any casual player. They’ve also provided a Lite version [App Store] which provides a good tutorial to start.

The game itself seems to offer a fair amount of content, but may suffer from the lack of user-adjustable difficulty settings. The game starts at a one-size fits all level of difficulty. I personally found the game to suffer from being “too easy for too long" while others seem to be struggling with the early levels. The game does apparently unlock a “hard" mode once the normal game is complete which should add more gameplay for those naturally adept at the game. Note that there are some reports of erratic save-game issues in this early version.

Overall, however, this represents a solid and fun casual strategy game that is accessible for even novice players.