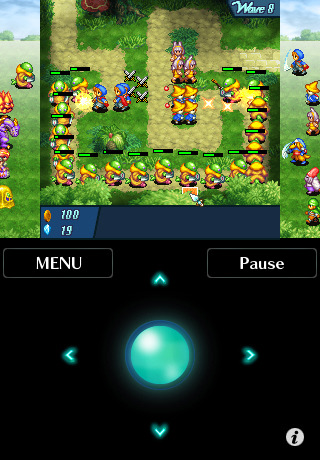 Crystal Defenders is a defensive strategy game in which players deploy popular jobs from FINAL FANTASY Tactics A2, such as Black Mages and Soldiers, to fend off encroaching enemy hordes and prevent them from stealing their party’s crystals.

Early forum adopters of the title, however, were appalled at the use of a large virtual control stick that takes up half of the screen.

Several of those who stuck with the title, though, were won over by the gameplay. Forum user h1976 captures the general sentiment:

First of all, that WTF button, ok the control works, but its lame, even if they want to do that, at least texture the thing, make it nicer not just a black pad with a giant blue orb.

It gives the game kinda an “indie" feel, feels like someone rips off the sprites of final fantasy tactics advance and pasted them in his own game, a pretty good game though I have to say. So my personal view, the gameplay is good, I love tower defense, so I’d give it a 10 personally. The level up system, the variety of the unit, good.

Fortunately, a free lite version is available to try that gives you the first 20 waves of one of the beginner’s maps.