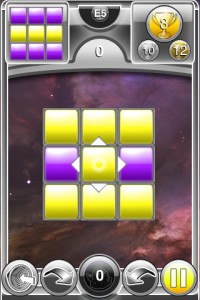 Adept Games’ Trixel [App Store] is a seemingly simple logic game that involves flipping tiles on a board to match a tile pattern. That, however, is not what makes this game stand out.

What makes Trixel different is its blend of twists, obstacles and power ups that gives this game its edge in this genre.  Trixel has a terrific soundtrack by a band called Prison Diet and the layout and graphics which are elegant yet functional.

A local scoreboard is included that tracks your progress in terms of stages completed, medals awarded, number of moves, and time spent.

The game offers two modes: “Puzzles" and “Race the Clock".  In Puzzles mode, you have a limited number of moves to match a tile pattern.  There are 3 levels of difficulty: easy, medium and hard with a total of 100 puzzles.  Easy is unlocked by default, and you will need to complete all the puzzles in this setting before you can access the Medium and Hard levels.  Even in the Easy mode, Trixel can be quite challenging.

Trixel offers a medal system where you’re awarded gold, silver and bronze medals based on your success in matching the pattern within a limited number of moves and you’ll need to score all gold medals in order to unlock the bonus puzzles.  The gameplay is pretty straightforward: A cursor appears over the square that you’re moving, and arrows show which directions are available.  You simply tap to flip the next tile. 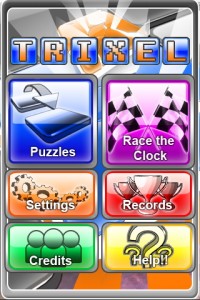 In Race the Clock mode, you have 12 maps and 4 modes: Relaxed, Fast, Frantic and Furious.  Think “speed round" because as soon as you finish one puzzle, another one is immediately thrown at you all of which must be completed within a time limit.  The objective here is to think fast and complete as many as you can.  A counter at the top of the screen provides a count of how many puzzles are in the series and how many have been completed.  The scoreboard tracks your progress, and you can easily rack up 400-500 moves from a series in the span of 1-3 minutes as you run through puzzles. 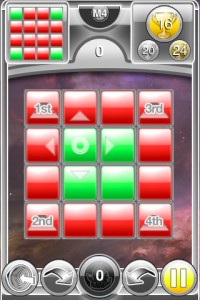 During the game, crystals will randomly appear on the board that can be collected for power ups.  Most of the time, I wind up starting over because they appear right at the time I’m about to finish a puzzle.  Of course, if you try to go back and collect it, you’re usually toast.  As I mentioned, an Undo option isn’t just handed to you; instead it will cost you 2 crystals.  A Warp power up which enables you to move from one spot to another of your choosing runs you 4 crystals; while Skip Puzzle which allows you to move to the next puzzle will take 8 crystals.  In “Race the Clock" Mode, the primary power up is a time increase of 5 seconds to the clock that will leave you 2 crystals poorer.  It’s a creative set up that adds a significant level of challenge and replayability to Trixel.

Trixel is challenging and addicting as is, but it could use some tweaking to appeal to a broader audience.  While not impossible, achieving gold medals for each of the single puzzles to unlock bonus puzzles may be asking a lot especially of casual gamers.  Aside from this, another thing that could be changed in an update is to offer the Race the Clock — at least the Relaxed mode — unlocked to start so that players can have the option right away.  It could open up the game to those who like the pressure of a timed environment.

Having said that, Trixel is easily one of your best bets if you’re into puzzles and logic games and should provide hours of gameplay.

This review was written by Big Albie, a guest contributor at TouchArcade. Big Albie is a regular on our forums who provides the community his first impressions on many of the new games being released in the App Store