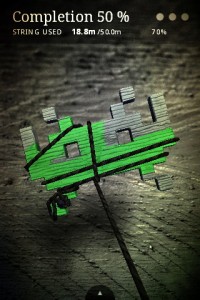 Secret Exit’s Frand recently released some screenshots from an upcoming update to Zen Bound [App Store] which will feature a new tree of objects to wrap (including a very familiar character on the right).

The new tree is called “Nostalgia" and will feature a number of new objects:

The tree itself is divided into four thematic groups: Childhood, Old Days (1920s or so), 50s Sci-Fi and Retro Gaming. Each group contains objects that we hope will at least somehow resonate with the player. Like with the other Trees, the objects are not directly named, but instead the level names are loose associations to the iconic properties they represent (the level with a wooden toy airplane has been named “Freedom", for example).

Zen Bound is a meditative game involving wrapping objects of wood and stone with rope. It has an appeal that’s hard to describe and won IGF Mobile’s “Best iPhone game" award.

Additional features in the update include:

The update will be submitted “soon" and will be a free update to existing customers.