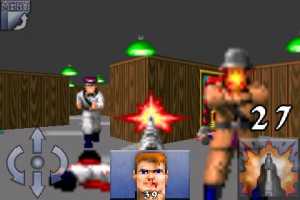 A lite/free version of id Software’s Wolfenstein 3D Classic [App Store] was released tonight for the iPhone and iPod Touch.

Wolfenstein 3D was first released in 1992 for the PC and was a massive success and has been rightfully described as the grandfather of first person shooters (FPS).

Game controls have been adapted to the iPhone and four different layouts of touch screen controls and the option to use tilt controls for either movement or turning. In practice the controls work well. Some readers have even said they are the best FPS controls available so far on the iPhone. Though, to be fair, the game’s engine is simpler than more modern FPS engines.

id is also hard at work on a Doom port complete with multiplayer support but that will require some ongoing optimization.

The Lite version of Wolfenstein offers the first three levels of Episode 1.