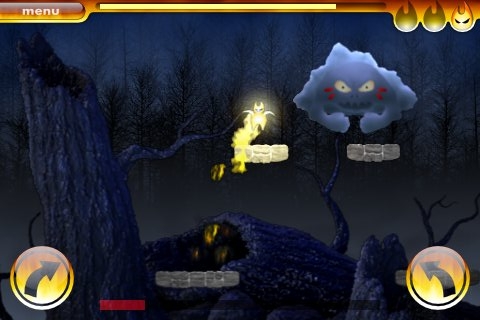 Last week, Monster Gila released their original iPhone platformer Ignite [link] to the App Store. The game is a very non-traditional 2D platformer that is well suited for the iPhone with excellent touch-screen controls.

The game’s protagonist is Iggy, a flaming ember that is defending his fiery world from the evil Water Warlords. Each level is composed of a number of floating platforms made of different materials — some flammable, some not. As always, your goal is to get to the end of each level by jumping from platform to platform. There are many interesting elements to this game, however, that make it surprisingly fun.

Iggy is, of course, on fire — but Iggy loses “health" and starts dwindling over time. The only way to restore the health is to ignite something on fire — either a wooden platform or a checkpoint marker. The wooden platforms, of course, can only stay on fire for so long before they are consumed. So, while each fiery platform restores your health, you also need to keep moving, else you’ll fall to your death. 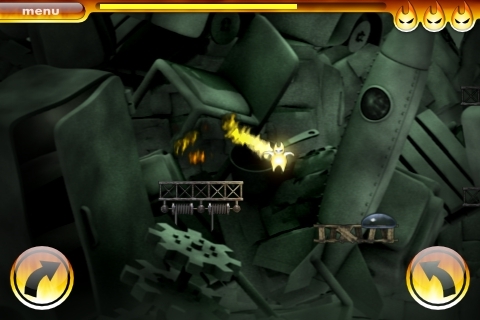 Don’t burn up enough platforms and your flame will dwindle out. The fire effect is rendered in real-time and, as your health drops, the ambient light also dims. The game introduces a number of other elements as well, such as watery enemies that consume your health/fire.

The game’s controls are nicely implemented and involve the use of one of two onscreen buttons. Simply pressing and sliding on either of the buttons results in a trajectory arc being shown onscreen. This represents the path that Iggy will take. Simple and effective.

The overall art style, music and atmosphere of Ignite really make it stand out. The game includes 30 different levels with 3 distinct environments. Be sure to watch our gameplay video to get a feel for the action:

Despite a seemingly simple gameplay mechanic, the game is surprisingly compelling and one we highly recommend.