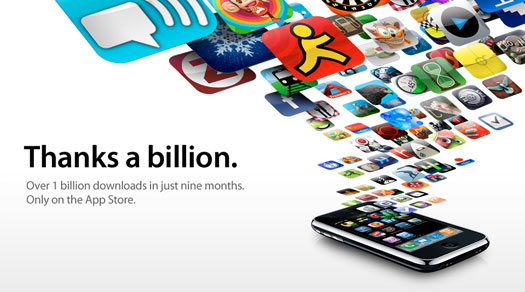 Apple has officially hit one billion downloads from their iTunes App Store. Apple has been running a 1 Billion App Countdown promotion offering a package of Apple prizes valued at over $13,000. App Store customers had a chance to win a $10,000 iTunes Gift Card, an iPod touch, a Time Capsule, and a MacBook Pro. The competition is now closed and the result should be announced shortly.

The 1 billion download mark is massive, of course, though Apple hasn’t revealed the breakdown of Free vs Paid applications. Apple did reveal at a recent financial results conference call that they have now sold 37 million iPhones and iPod Touches. That is a jump of 7 million devices since December of 2008.

Of interest to our readers, Games remain the single largest category in the App Store and seem to represent a disproportionate number of the top app sales rankings. Apple has published a list of the all time top paid and free applications.

Obviously, we feel that the iPhone gaming market is growing tremendously and these numbers certainly confirm that.