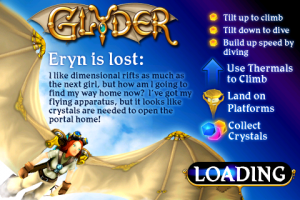 During the Game Developer’s Conference late last month, Touch Arcade had the opportunity to sit down with Glu and spend some time with a number of their upcoming titles.

One of the more impressive games we saw was Glyder [App Store], a casual flyer in which the player takes on the role of Eryn, an unfortunate girl thrown through a dimensional rift, who’s just trying to find her way home.  We’ve since received a copy of the final release version of the game which is now available in the App Store and have spent most of the day soaring about the game world trying our best to get Eryn home.

In Glyder, Eryn is equipped with a da Vinci-esque flying apparatus and must complete a series of missions across six different island worlds, collecting floating crystals of various colors in order to open a portal that will lead her home.  Along the way, she can get speed boosts by picking up power-ups and gain altitude by flying into thermal pockets (corridors of updraft air) spread about the game world.  Additionally, various mini-missions crop up from time to time, such as flying from one side of an island to another by way of purple platforms, etc.  And, at any time, the player can move to the next world by flying beyond the boundaries of the current world towards a distant, visible, neighboring island. 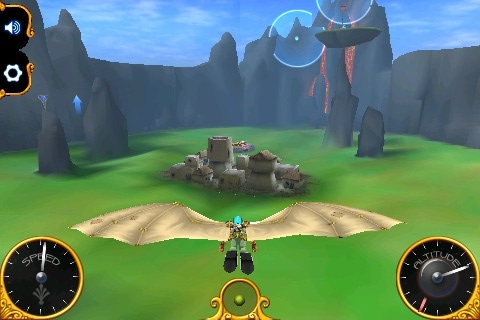 The overall feel of Glyder is highly reminiscent of Pilotwings 64‘s “birdman" secret flight mode, where the player dons a pair of wings and flies freely about the game world.  While there’s no actual flapping involved, the thermals and general flight model are quite similar to the Nintendo 64 classic.  (And this would be a compliment to Glyder.)

The game features accelerometer-based flight control that feels responsive and works well, but lacks a calibration option which limits play orientation (home position is at an approximate 45-degree angle).  Achievements – 50 in all – are unlocked by performing various feats such as visiting every area of a given world, achieving maximum possible velocity in a power-dive, completing mini-trips, and the like.  The combination of gem collection, mini-missions, and achievements does instill some sense of progress to an otherwise laid back gaming experience. 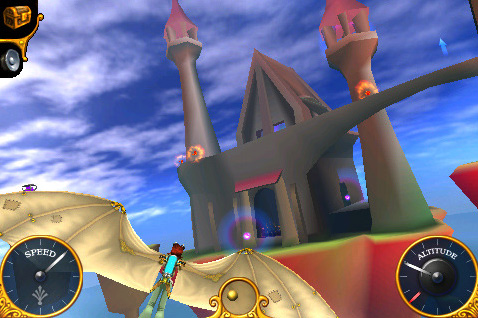 Graphically Glyder is impressive.  The 2D title and menu artwork is clean and the 3D in-game graphics are well rendered and feature notable draw distance.  However, the game does sometimes suffer from occasional framerate issues, especially on lesser devices than the 2G iPod touch, which is the fastest iPhone platform device of the lot.  It’s nothing that really gets in the way of playability, but it is noticeable from time to time.

See our gameplay video for a look at three of the game’s six island worlds (recorded on 2nd Generation iPod Touch):

Glyder’s pleasant sense of soaring, combined with the title’s soothing soundtrack, makes for a relaxing game experience.  That’s not to say that there’s a lack of challenge to the title; some of the narrow corridors that must be negotiated in order to secure that last crystal are quite harrowing.  The game is well implemented and offers a very different type of gaming experience on the iPhone — one that people generally either really like or really don’t.

We believe those who find Glyder‘s concept and video appealing will indeed find it to be a very enjoyable experience that is well worth the game’s $1.99 introductory price. Exploring all the 6 worlds, completing each achievement and collecting all gems also offers plenty of gameplay time.