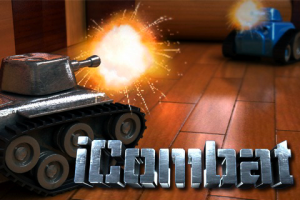 Some of my best gaming memories, and certainly my earliest, are of hours spent blasting enemy tanks in Atari’s Combat, the pack-in game that came with the Atari 2600 game console.  The graphics were horrible, the sound was worse–it was the late ’70s, after all–but there was something deeply satisfying about blowing away that enemy tank before it got you.

As time rolled by, hardware became much more powerful and that same, simple tank-to-tank proposition got a prettier face in a number of releases over the years.  One that modern gamers may be familiar with is Tanks!, part of Nintendo’s Wii Play collection, that adds a great deal of gloss to the core Combat game mechanic.  Tanks! is a do-or-die battle between toy tanks in an arena of wooden building blocks with a number of nice, new ways to cause destruction that Combat only dreamed about.  It’s hugely fun. 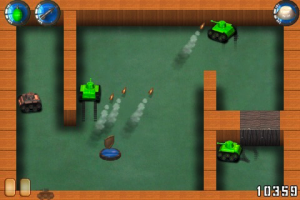 iPhone and iPod touch gamers now have a chance to get in on this particular sort of fun with iCombat [App Store] from Web Scouts.  iCombat, while surely inpired by Atari’s classic Combat, would be much more accurately described as an iPhone take on Tanks!.

iCombat places the player in a tiny tank battle set among barriers of wooden blocks and cloth textured backgrounds. War is waged using the tank’s cannon as well as various items that can be picked up along the way, such as grenades, homing missles, land mines, and shields.  The tank’s shells ricochet off walls and barriers, which adds an element of strategy (bounce a shot around a corner) as well as danger (don’t blow yourself up!).

iCombat‘s controls work well.  The game features accelerometer-based steering with a tap or drag to fire.  (Dragging brings up an onscreen reticle and line-of-fire marker for more precise targetting.)  The game’s options screen allows for adjustment of the home tilt angle.

As a fan of Wii Play’s Tanks!, I find iCombat to deliver an enjoyable (and cute) pick-up game experience reminiscent of both the Nintendo shooter and the Atari classic that inspired it.  Our forum members are finding it rather to their liking as well and, according to the developer, there are more maps and refinements in store.  Anyone who likes what they see here should grab the game at it’s limited introductory price of $0.99.  It’s a good time.

Those who like the sound of this game may also want to have a look at Alwar Entertainment’s Tank-O-Box [App Store].