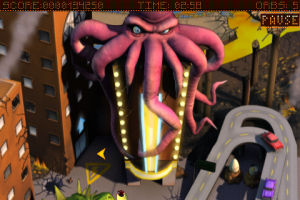 IUGO’s Freeballin’ [App Store] game appeared in the App Store tonight at an introductory price of $1.99.

We received a preview of the game at GDC and find both graphics and audio to be top notch. The game itself delivers a zanier take on pinball with four distinct tables: Tiki Trouble, Monsteropolis, Dreams and Nightmares, and Neometric. Each table can be played in the following modes:

All tables comes with a number of specific “missions" that can be activated. These missions offer you an opportunity to increase your score and also keeps the game interesting by giving you specific goals. These goals basically force you to control your ball and direct it towards specific objects. Missions including hitting specific bumpers, going into specific chutes, and affecting other objects.

The game is being discussed already in our forums and initial reactions have been very positive.

This video was shot at GDC last week:

Global high scores for all modes and tables should offer competitive gamers plenty of reason to improve their scores.