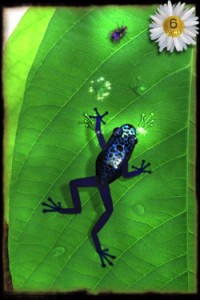 Ancient Workshop has recently released a rather unique and most unusual puzzler for the iPhone and iPod touch.  Ancient Frog [App Store] provides both a soothing and frustrating gameplay experience.  Quite a combination, eh?

The goal of the game is to move a lifelike frog from the bottom to the top of the screen so that it may eat a fly that has unwisely lighted upon it.  This involves moving one leg at a time to and from various marked foothold points via touch / drag in a fashion that brings to mind the game of Twister.  When any of the frog’s feet are touched all points of foothold that can be reached by that foot, given the frog’s current orientation on the leaf, is illuminated.  It’s an interesting challenge that starts out quite easy but quickly becomes (maddeningly?) difficult.

The game features 100 levels with six species of frog and a variety of environments.  The graphics are realistic and very well done.  The faint play of light and shadow that slowly dances upon the playscreen’s natural looking backdrop from the canopy above, combined with the hypnotic, ambient forest soundscape, sets a very relaxing atmosphere…that helps take the edge off of the game’s mindnumbing difficulty.

Ancient Frog is a unique experience that puzzle fans may well find worth a look.  Have a look at the lengthy Ancient Frog discussion thread in our forum where it has been rather positively received.

See the developer’s gameplay video to see what we’re talking about.