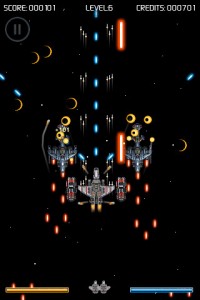 Ketara Software has released their first space shooter SpaceX [App Store] as a free download for a limited time. The developer describes his intention:

The idea was to make a fun, fast-paced, and beautiful and deep game which invokes the feeling of the early 90s shooters I used to play as a kid. As you fly more missions, you can upgrade your ship, weapon systems, etc., and control the ship using touches or tilt controls.

The game offers a traditional vertical scrolling shoot’em-up with tilt or touch controls as well as a number of upgrades in between levels.

Overall a reasonably implemented shoot’em-up that will waste some time and is worth the free download. The inclusion of a global high-score is also nice.