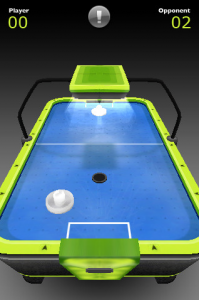 Sean McNamara has just released Air Hockey Pro [App Store] for the iPhone and iPod touch.  Air hockey fans may see this game as an early Christmas present, as it captures the overall look and feel of air hockey better than any other App Store offering.

I have to agree with the developer’s sentiments regarding 2D air hockey titles in the App Store.  Regardless how much polish the top-down games have, there’s a cramped feeling to the gameplay in most of the games out there.  Touch-controlled Air Hockey Pro indeed conveys an accurate sense of scale which goes a long way towards setting it apart from its peers.  Adding to the feeling of realism is a subtle viewpoint “sway" as the puck bounces about the table.

Air Hockey Pro is currently the best game of air hockey to be had on the iPhone and well worth its $0.99 App Store price tag.