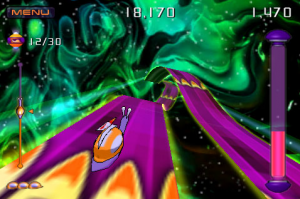 Sandlot Games has released an App Store title that–and we’ll come right out and say it–is one of the best games available for the iPhone and iPod touch.  Snail Mail [App Store] is a kart-style racer in which the player controls a racing snail on a mission to collect packages and deliver them to the farthest reaches of the universe while dodging obstacles such as laser towers, slugs, asteroids, and salt (it burns!).

A long time ago in a galaxy far, far away…

There is turmoil within the Republic. The SLUG PIRATES have established trade barriers all along the Intergalactic Highway barring all package delivery. Fearful of the Slugs’ wrath, the Galaxy Postal Service has gone on strike. Meanwhile, on planet Earth a young snail named TURBO has come of age and is ready to join the ranks of SNAIL MAIL, the fastest delivery service in the known universe. Now TURBO will have to brave great dangers to collect, protect, and deliver the packages that we rely upon…

Turbo is a cel-shaded racing snail that rides a ribbon-like track extending through the animated, nebulous backdrop of space.  The track features rolls and loops, harrowing gaps and jumps, and the aforementioned obstacles which combine to make the task of delivering intergalactic mail a rather challenging one.  Those familiar with Mario Kart will find Snail Mail‘s track arrangement highly reminiscent of the Nintendo kart racer’s Rainbow Road level. 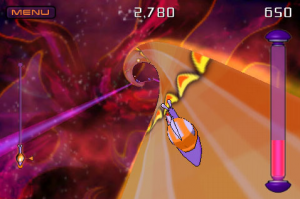 Snail Mail offers three modes of play.  In Postal Mode, it’s all about gathering as many packages as possible and making it to the mail stop in one piece.  Time Trial mode is a race against the clock to the finish line and the aptly named Challenge Mode is a carnival of obstacles and track trickery that is quick to humble the most confident of snail racers.  A Tutorial mode is also available for the uninitiated.

The game features some of the most spot-on accelerometer control I’ve seen on the iPhone.  It just feels perfectly right and takes the game well beyond Sandlot’s original Windows version.  As illustrated in our demonstration video (easier to film), there is also a touch mode for those afraid of tossing their iPhone across the room.  Snail Mail can be played in portrait or landscape mode depending on the orientation of the iPhone.

Everything about this game is fun.  The cutely rendered snail, his amusing, goofy quips, the clean track and backdrop visuals, and the smooth, excellent control system all combine to make Snail Mail a unique and challenging kart-style racer that’s rather hard to put down.

Not only is this some of the most fun to be had on an iPhone or iPod touch, but right now it’s easily one of the best values as well at its limited time, introductory price of $1.99 [App Store].  Do not let this one pass you by.