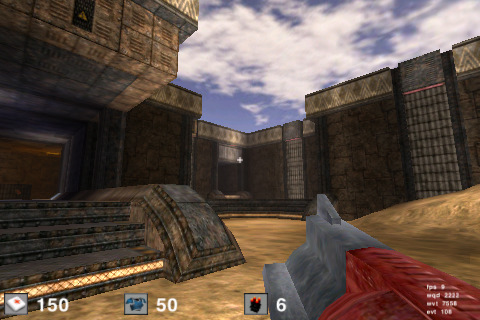 The long awaited release of the first true First Person Shooter has arrived. Cube [App Store] has finally made it into the App Store after a lengthy approval process.

Cube is an open source multiplayer and singleplayer first person shooter game built on an entirely new and very unconventional engine. Cube is a landscape-style engine that pretends to be an indoor FPS engine, which combines very high precision dynamic occlusion culling with a form of geometric mipmapping on the whole world for dynamic LOD for configurable fps & graphic detail on most machines. Uses OpenGL & SDL.

The iPhone port is described as a technology demo that supports all the functionality of the desktop version, though they warn that some of the features are impractical on the iPhone. Indeed, early impressions of the game show framerate issues on many of the levels, but should be a fun distraction and a prelude to what is to come in the future for iPhone gaming.

The developers report that they are working on getting version 1.2 submitted to Apple to address many of the known bugs — including the compressing of many of the textures to make them load faster and take less memory.