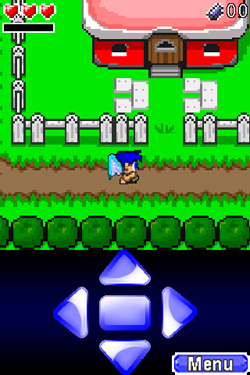 Once upon a time, in a land of magic, two wizards ruled in peace. The legend says that the Red Wizard unlocked the power of the Sword of Angels, a blade forged by the gods using good and evil magic. Over time, the power of the sword filled the Red Wizard with darkness. In order to stop the Red Wizard, a guardian angel was summoned using the power of light. Now you must guide this hero on the path to recover the Sword of Angels and restore peace through out the land. Prepare to battle demons, solve mysteries, and travel across two major lands in search of the legendary Angel Sword.

Angel Sword is a Zelda-like adventure both in gameplay and appearance.  Although not actually a retro title, it looks like one, likely due to the lowest common denominator of the smartphone platforms the game supports.  The main character is controlled via an on-screen button rose and by way of other contextual pop-up buttons.  A simple musical score accompanies gameplay.