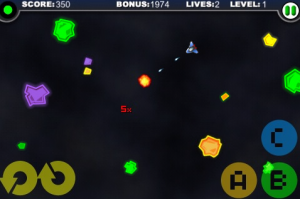 Sputnik Games has released an iPhone take on the retro classic Asteroids through the App Store.  Aerolite [App Store] features updated color graphics that maintain a retro feel along with on-screen console style control buttons (that can be moved anywhere on-screen you like).  But is it fun?  It is if you like Asteroids.

Navigate the ship around the screen by pressing the virtual buttons and blow up the space rocks flying around. Level one starts off with only a few asteroids. As you complete each level more and more asteroids will appear making the game even more challenging.

A shortcoming of numerous Asteroids clones is sloppy ship physics.  Nothing of the sort plagues Aerolite; the ship’s acceleration, deceleration, and overall control are spot-on.  The game features an ambient musical track along with sound effects, but a song from the iPhone’s song library can optionally be played instead.

If you’re the type of gamer that would thrill at the prospect of walking the hallowed aisles of the Luna City Arcade, then $0.99 Aerolite is for you.