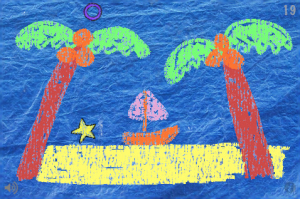 Touch Physics presents the player with a crayon-drawn level filled with various crayon-drawn objects with which to interact, the most important being a wheel.  At the end of each level is a star.  The object of the game is to draw shapes with your crayon that will cause the objects on-screen to move the wheel to the star.

The developer’s demonstration video illustrates this.

Touch Physics has received a positive reaction from our forum members and is currently available for the “limited time introductory price" of $0.99 [App Store].