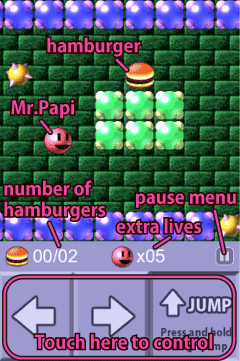 I still don’t know what it is about Mr. Papi that makes us so happy.

But we’re not alone in our love of Sunflat’s Papi franchise, as they seem to have developed quite a following. At first glance, the latest installment from Sunflat, PapiJump Cave [App Store], appears to be another solid game. I’ve only been able to play through the first few stages, but stopped so I could deliver this gameplay video (and I kept dying) which may help you decide on getting the game yourself.

The game is a traditional 2d platformer in which you control Mr. Papi. On screen buttons provide left/right and jump movements and the goal of each level is to clear all the hamburgers (Mr. Papi is hungry, it seems). In your way are “spiky balls", trampolines, moving platforms and green blocks that give way when you jump on them. The controls work reasonably well and the early levels are fun and do seem to ramp up in difficulty pretty quickly.

Sunflat describes the game as having 25 levels, broken into stages. The final (5th) level in each stage (except the final one) is a bonus level in which you collect as many hamburgers as possible for bonus lives.

The video shows the entire first stage and part of the second:

Once you reach a new stage, you can start back at the 1st level of that stage. While tilt controls for character movement are offered, they are not recommended. Like other Sunflat games, there’s a level of unpolishedness/simplicity to the game menus and there does not seem to be any way to resume a game if you are interrupted. At $1.99, however, this is still an easy game to recommend even after our brief playtime.