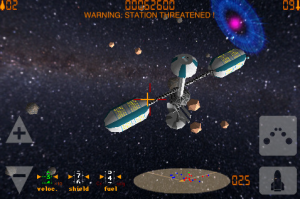 In Zone Warrior, someone parked a space station in the middle of an asteroid field and it’s your job to defend it against the asteroids that are slowly tumbling towards the station.  On higher levels, enemy alien fighters join in the mix, making your task notably harder–it’s difficult to blast asteroids while engaged in a dogfight.  Once all the asteroids in a level are cleared, you return to the station and dock with the assistance of a docking computer.  If the station is damaged, however, it’s your task to (perfectly) line up with the rotating station’s docking bay and guide yourself in–think 2001: A Space Odyssey.  It’s not easily done.

The game utilizes the iPhone’s accelerometers for flight control, with an onscreen button for lasers as well as smart missiles.  In the event of a manual dock, a roll control slider appears.

While the station, asteroid, and ship graphics are rather basic polygons, the smooth-panning starfield backdrop and rotating planets strewn about the system make for a convincing feeling of moving through space.  The game features decent sound effects and no in-flight musical track (the dead-silence of space is your theme song).  The explosion effect is particularly impressive.

I find Zone Warrior to be an enjoyable shooter that reminds me to some degree of the good ole’ days of Star Raiders and the like.  If you always wanted to see what Asteroids looks like in 3D, this $3.99 App Store title [link] might be worth a look.