Neil Young of iPhone game development house ngmoco recently was kind enough to grant Touch Arcade an interview regarding the company’s recently announced titles, the Rolando announcement and what lies ahead for iPhone gamers.  The full story is coming soon, but a particularly interesting point from the interview is an as-yet unnamed title that should hit the app store before the holidays. 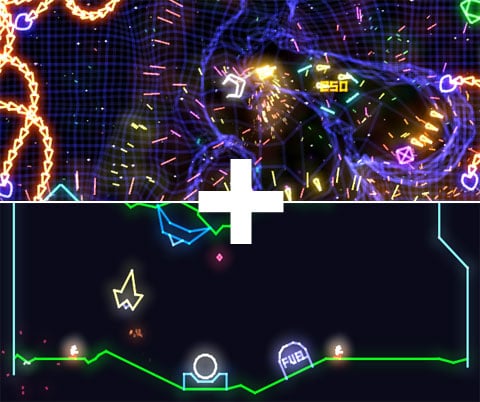 The game in question is a shooter that is more or less a marriage of Geometry Wars: Retro Evolved and Thrust–and for those unaware, those are two of the best games ever written for any platform.

Geometry Wars is a modern title (XBOX 360, PC, Wii) with a retro / psychedelic feel that is basically Robotron on steroids…in space.  Thrust was a popular 80s game, originally released for the BBC Micro and Acorn Electron, that takes Lunar Lander and adds perfect physics–a superb title.  Being a die-hard retro gaming fanatic (and a rabid fan of both of the aforementioned games), I can easily say that I am more excited about this title than any other in the App Store.

Gamers not on-board with the retro gaming surge need not fear, however.  Neil indicates that with this title, ngmoco is not simply bringing an old contept to a new machine, but is incorporating the control, graphical flair and energy that modern iPhone gamers are looking for.

Presently the game features 200 levels, which Neil indicates is probably too many–expect a reduction. What’s more, the final game may (or may not) feature fully editable levels.

I was unable to hide my excitement for this upcoming title and, noting this along with my retro obsession, Neil indicated that the game is probably everything I am hoping it is.  I can’t wait.  Stay tuned for more on this title as information surfaces.