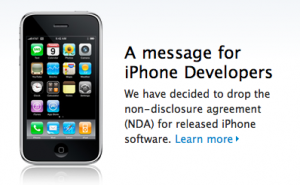 Apple has announced that they are lifting the iPhone developer non-disclosure agreement.

We have decided to drop the non-disclosure agreement (NDA) for released iPhone software.

We put the NDA in place because the iPhone OS includes many Apple inventions and innovations that we would like to protect, so that others don’t steal our work. It has happened before. While we have filed for hundreds of patents on iPhone technology, the NDA added yet another level of protection. We put it in place as one more way to help protect the iPhone from being ripped off by others.

However, the NDA has created too much of a burden on developers, authors and others interested in helping further the iPhone’s success, so we are dropping it for released software. Developers will receive a new agreement without an NDA covering released software within a week or so. Please note that unreleased software and features will remain under NDA until they are released.

Thanks to everyone who provided us constructive feedback on this matter.

This should come to welcome news to developers who have been limited in their public discussions about iPhone development. This should also pave the way for iPhone developer books which have been on hold due to the NDA. Apple will be publishing a new NDA which still covers unreleased software and features.