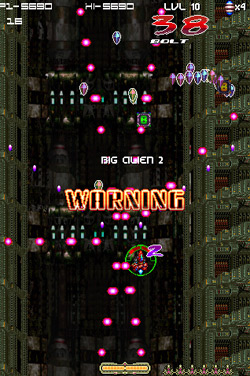 In early August, JadeGame released its 2D scrolling shooter MetalAngel [App Store] through the iTunes App Store.  We took a look at the v1.0 release and found it to be highly disappointing.  In that release, the player moves level to level, dragging or tapping an auto-firing spaceship around the screen, dodging enemy fire, destroying enemy craft, and picking up gems and various power-ups.  That’s all fine and well–it’s just that the game was slow.  Everything about the game was slow.  Slideshow slow.  It was basically unplayable.

A v1.1 update arrived shortly thereafter which did little to help the situation.  It replaced the touchscreen controls with an over-sensitive accelerometer control system that made the game less playable than before.

Changes in v1.2, according to JadeGame:

Does the v1.2 right all the wrongs?  The game is much improved–definitely playable.  But there’s room for improvement yet.  A further speed boost would be welcome; it still feels a bit slower than a scrolling shooter should.  A greater variety of enemies and backdrop scenery would make the game more appealing, as well.

Have a look at a video recently posted by the author that shows v1.2 gameplay and decide for yourself if MetalAngel is worth your $3.99 [App Store].

A discussion of MetalAngel v1.2 can be found in our forums.