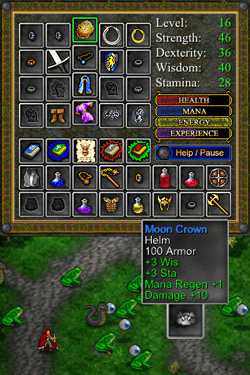 And when I say “pick-up," I mean it.  Loot Master is the most abbreviated RPG I’ve ever seen.  At first these sound like harsh words, but after playing a few rounds, I think Loot Master hits the intended mark, which is to deliver an RPG experience to the mobile player who is looking to kill 3-4 minutes waiting in line at the bank.

The game screen consists of a stats readout and various character equip slots at the top and a playfield at the bottom.  The objective is simple: Monsters are trying to cross the playfield from left to right–do not let them.

Tap a roving monster to attack it.  When killed, some monster leave behnd a weapon, shield, spell or ring that can be dragged up to an equip slot to strengthen your player.  Spell items can be dragged from holding slots at the top down onto a group of monsters to unleash its destruction.

Features as listed by Digital Concepts:

Loot Master is simple (and I mean simple) RPG fun on the go.  However, at $5.99 [App Store], all but the most die-hard RPG hounds may find the title a bit pricey.