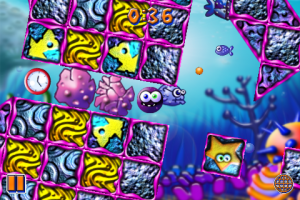 Tag Games has announced the forthcoming release of their first iPhone game, Rock’n’Roll.  An action puzzler, Rock’n’Roll for the iPhone is an accelerometer and touchscreen based port of the developer’s highly rated mobile title.

The story behind Rock’n’Roll is a familiar concoction of friendship, music, kidnapping and blown fuses! You play as ‘Roll’, a rather well rounded character, who must enter the spinning mazes of Flint Island in an effort to recover the Evil Sky Spirits musical notes and save his best friend ‘Roll’ from imprisonment.

Rock’n’Roll is an incredibly simple game to pick up and play, just rotate the maze left and right using either motion sensing or touch controls and Roll magically falls through it by the power of gravity! Collect all the musical notes in a maze to escape. Complete them all and the Evil Sky Spirit just might release Roll.

The game features 30 mazes across three different environments and offers two modes of play: quest and race against the clock.  Rock’n’Roll gameplay is set to an original soundtrack comprised of a mix of “traditional Americana" rock.

Rock’n’Roll is set to appear in the iTunes App Store later this month.