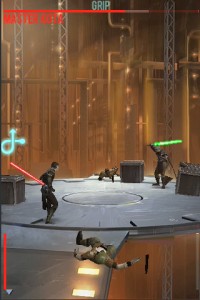 The iPhone version of The Force Unleashed is a smaller companion game to the full featured video game that is arriving for gaming consoles such as the PlayStation 3, Wii and Xbox 360. The full version of the game offers an impressive physics engine (trailer) with a focus on using The Force.

The mobile version of the game (including the iPhone version), however, is “very different" and uses a much more limited engine which incorporates the use of specialized gestures that correspond to different Force attacks and defenses.

We’ve posted screenshots of the game including the control instructions with our announcement article. The game makes good use of the iPhone’s touch screen to allow you to draw gestures on the screen that correspond to specific attacks or defenses. 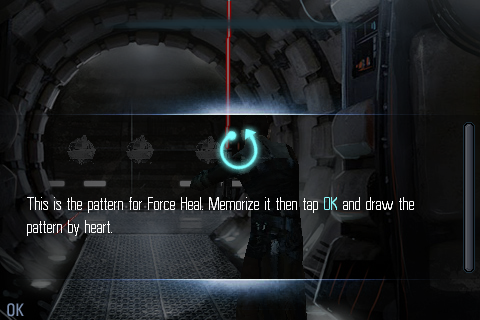 The game is played by invoking these gestures at the right time in order to defeat your enemies. Your character, however, moves from scene to scene without your direct control. Over time you do build up an arsenal of additional gestures that can be used at will. Some enemies must be defeated with specific powers, while others can be defeated with any choice.

The game provides a Story mode (with lengthy dialog/transitions), Chapter Mode (to replay Chapters from Story Mode), and Survival (where you play for a high score). This embedded video shows the first Chapter in the story, after the initial training is complete. Following the Chapter (including the Boss fight), you can see the next level of training which introduces new attacks.

The entire Story can be played in one sitting of about 2+ hours. There are 6 Chapters total in the story intertwined with a lengthy plot line. If not for the plot line dialog and transitions, the game could be completed in an even shorter time period.

The actual game play is quite enjoyable and tie-ins to the Star Wars franchise certainly help. Who hasn’t wanted to fling storm troopers into a wall with the flick of a finger? But the actual “puzzles" presented are incredibly simple, making the game just a paint-by-numbers sort of experience.

After you complete the 6 levels, it’s difficult to imagine that you’ll want to play the game again (especially with the un-skippable cut scenes). As a result, I think this game may only be worth it for the die-hard Star Wars fan, and even then with the understanding that your $9.99 will not get you long term replayability.