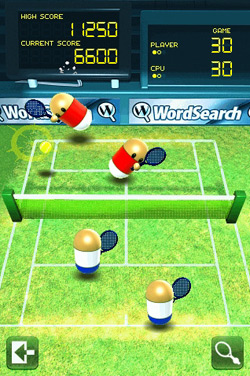 So says mobile developer FinBlade of its recently released iPhone sports title Tennis Slam [App Store] that aspires to bring the award winning gameplay of the Wii favorite to your pocket. So has FinBlade delivered a Grand Slam iPhone event?

Well, Wii Sports tennis, it’s not.  But that’s not to say the game should be entirely written off.

Tennis Slam features an over-the-shoulder perspective court, resembling a fixed-camera version of the Wii Sports court, upon which cute bobble-style characters hover around, playing a game of doubles.  The graphics are cute and clean and the game features comical flourishes such as fig leaf-wearing spectators streaking the field.  Unfortunately, the current version lacks audio of any sort.

Tennis Slam, like Wii Sports tennis, is a simplified take on the game.  The player controls the two players on the near side of the court.  As is the case on the Wii, the on-screen player position on the court is automatic and only the serve and consecutive returns of the ball are controlled by the player.  The serve is performed by either tapping anywhere on the iPhone’s screen or by jerking the iPhone in any direction.  Returns are controlled in a similar fashion; a tap or a jerk causes the player closest to the ball to swing. (I found the jerk method to be more satisfying than the tap.)  The fact that the iPhone’s screen is part of the device prevents Tennis Slam from exploiting the iPhone’s accelerometers in so effective a way as Nintendo has the Wiimote in Wii Sports.

Three modes of play are offered: single game, best of 3 games, and best of 5 games.

While I found the gameplay to be more or less enjoyable for short periods, there is a constant feeling of claustrophobia that can be frustrating.  The court is so small relative to the players that, at times, it can be difficult to even find the ball among the “crowd."  While smaller, less detailed graphics might reduce the game’s “comic charm," they would go a long way towards improving gameplay.

Any iPhone gamer who has suffered tennis elbow at the hand of Wii Sports tennis may want to have a look at this App Store offering, but understand that it’s more tied to Wii Sports in spirit than in gameplay.