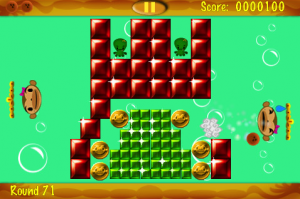 The game is a multi-touch take on the classic breakout/arkanoid formula. The two chimps on either side of the screen are controlled independently with your thumbs, and your goal is to bounce a coconut between the two chimps to eliminate all the blocks. Enemies and powerups are also available.