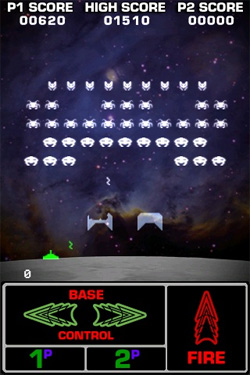 Space Invasion is a remake of Taito’s 1978 classic Space Invaders with a few perks.  Since there can’t be a person reading this post who hasn’t heard of Space Invaders, I won’t get into a detailed description of gameplay.  Suffice it to say, you contol a laser turrett that can be moved left and right and your objective is to destroy the advancing alien horde.  Aside from more lavish graphics than the original, Space Invasion features various power-ups that drop from the occasional blasted alien, such as power shots (destroy a column of aliens with one shot), shields, extra lives, and bonus points.  Adding challenge, the “mystery ship" that moves across the top of the screen drops bombs, as does the occasional blasted alien.

Space Invasion features multitouch control (one thumb for ‘left’ / ‘right’, one for ‘fire’) that works well and feels responsive.  This is a solid Space Invaders port.  If you love that classic, you’ll likely find Space Invasion worth its space on your iPhone or iPod touch.

Space Invasion is available for $3.99 [App Store] through the iTunes App Store.

StarByte has posted a sample gameplay video (which lacks sound, unlike the game):