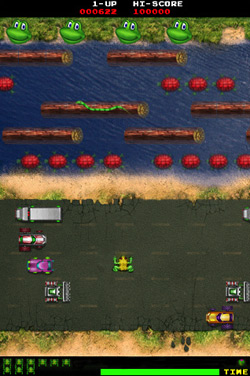 Frogger for the iPhone is an adaptation of Konami’s 1981 arcade original featuring updated graphics, an updated soundtrack, and a choice of touchscreen or accelerometer controls–or both combined.

Like the original, the goal of the game is to direct five frogs, one by one, from the starting point at the bottom of the screen to their homes at the top before the timer runs out.  It’s a treaturous journey.  The lower half of the screen consists of a busy roadway with five lanes of speeding traffic.  The upper half contains a rushing river filled with logs, turtles, alligators and other such hazards.  The challenge is getting the frog home safely without getting flattened, drowned (this was always puzzling…), or eaten.  It sounds simple, but can be rather frustrating challenging.

The iPhone version offers both accelerometer and two types of touchscreen controls.  Moving your frog with the accelerometer involves “jerking" the iPhone in the intended direction of travel.  Touchscreen control works with either a tap in the intended direction relative to the frog’s current position or a swipe (anywhere on the screen) in the desired direction, akin to the “swipe" control mode of Ms. PAC-MAN for the iPhone.  Both control systems are active simultaneously by default, but either can be turned off in the game options.  After spending time with all control methods, the swipe technique seems the most precise.  The iPhone’s vibrate feature is also utilized by the game.

Frogger for the iPhone is…well…Frogger–not much more, not much less.  If you’re a Frogger fan, then you’ll enjoy this outing. If not, you may find a better value in some of the other $9.99 games.

As Pocket Gamer reports, Konami is enthusiastic about the iPhone as a gaming platform and will be bringing more content in the near future.

“We see the iPhone platform as an opportunity to showcase the legendary Konami brands in a truly unique fashion," he says. “We look forward to releasing more of our popular titles for the iPhone soon."

One thing to note: The official line from Konami is that right now Frogger is iPhone-only (not iPod touch compatible), despite iLounge reporting that they successfully installed it on an iPod touch.  Konami indicates it will be releasing a verison compatible with the iPod touch soon.  (Thanks chrisb3)