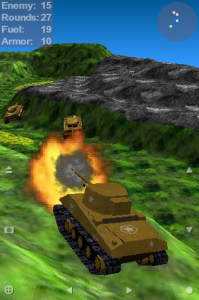 Chillingo Ltd has released RESETgame’s Tank Ace 1944 [App Store] for the iPhone tonight on the App Store. Tank Ace 1944 is a tank game in which you drive over 3D terrain while battling other tanks in World War II.

In Tank Ace 1944 you command a World War II tank charging to occupy the enemy capitol. Allied and Soviet Tank Aces advance on Berlin; German Aces advance on London and Moscow. At least that’s what the orders from HQ say. But since you face overwhelming odds and are forced to scavenge supplies as you go, you might just find yourself retreating instead.

The $9.99 provides an impressive screenshot suggesting a 3rd person point-of-view tank shooter. Controls are touch-based and allow you to control the movement of the tank (forward, back, left, right and fire) as well as independent control of the turret (up, down, left, right).

The gameplay consists of receiving “orders" for your mission and then basically finding the enemy tanks and shooting them. Ammo, fuel and armor can be replenished by ramming into supply trucks.

This game is an iPhone port of an existing mobile gaming title which is available for BlackBerry, Palm, Samsung Instinct, and Windows Mobile… and it shows. The 3D graphics shown in the screenshot is a bit misleading. This is not a real-time 3D rendering of the terrain. Instead the scenery is a essentially a static background that is re-rendered when you leave the designated block on the grid, in an almost slideshow-like effect. While I tried not to let this taint my view of the game, the controls were a bit awkward and I felt the gameplay was not worth the $9.99 asking price.