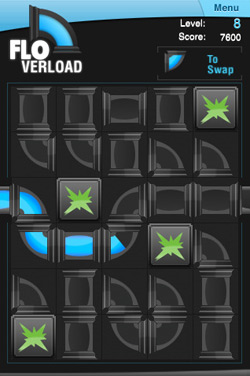 FLOverload presents the player with a gamescreen filled with tiles marked ‘?’ that flip over to reveal pipe segmets when touched.  The object of the game is to quickly reveal as many of the obscured tiles as possible and arrange the pipe segments in such a way as to construct an unbroken pipe pathway from the starting point at left to the end point at right in order to allow an unobstructed flow of water across the gamescreen.  But, don’t tarry–as soon as the game begins, the water starts to flow…  Once a fully-formed pipe has been successfully created, the player can shake the iPhone to cause the water to quickly flow its path and conclude the current level.

Aside from pipe segments, certain tiles contain obstacles around which the pipe must be routed.  There are also bonus tiles that increase the score as well as stopwatch tiles that halt the flow of water for a short period.

The current version of FLOverload features 25 levels, but the developers indicate that a forthcoming update will bring an additional 25 levels and more overall “balance" to the levels in general.

Although I could find no details on the App Store info page or product website, FLOverload appears to support a community high-score board, but despite repeated attempts to interact with it, I could not successfully connect. Also worth a mention is the lack of gameplay documentation. The developer indicates, however, that a forthcoming update will bring instructions to the game.

FLOverload is a well done implementation of this formula and anyone who is a fan of the original should enjoy this title and find it’s $1.99 App Store pricepoint rather fair.