Radius is a fast-paced action game that presents the player with a shiny sphere that can be rotated with finger swipes. In random locations all across the surface of this sphere, enemies are constantly spawning.  The objective of the game is to stop them from destroying the sphere by tapping them to destruction.  In time, the frequency and number of spawning enemies increases to a fever pitch. 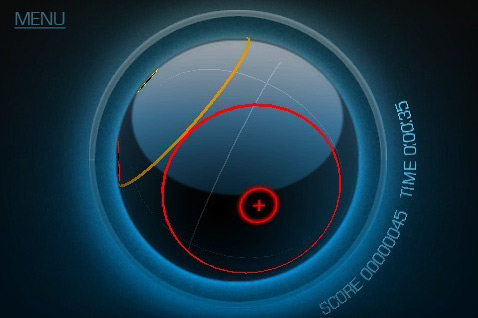 Radius has a polished look and offers innovative gameplay that I find both challenging and enjoyable.  Until I learned just how to control the game however, this wasn’t the case.  My initial instinct was to drag around the sphere until an enemy was in view, stop dragging, and then release my finger in order to tap it to oblivion.  Occasionally, however, upon release the sphere would drift about in an unexpected manner.  This was frustrating.  Eventually, though, I came to realize that in order to most accurately control the sphere, one must drag-lift in the desired direction, letting the sphere coast on its own until the target orientation is reached, then perform a single tap to stop the sphere.  Using this control method, the game is very playable–but it wasn’t my first instinct, and I am guessing many will need to “adjust," just as I did.

Radius retails for for $3.99 in the iTunes App Store.