At its core, SolarQuest is a simple title. It’s basically a graphically updated version of the classic 2D side scroller Snake / SFCave in which the player controls an object moving through an ever-scrolling corridor filled with obstacles, the only control being an upward thrust (yes, upward) which is either on or off. Thanks to gravity, the player weaves a sinusoidal path through the levels while dodging obstacles by applying well-timed thrusts.

To this equation, SolarQuest adds a 3D spacecraft, 3D obstacles, a parallax scrolling 2D/3D landscape, bonus pick-up items, and afterburner control for two rates of forward travel. In the iPhone version, the player controls thrust on/off with one thumb and afterburner on/off with another. 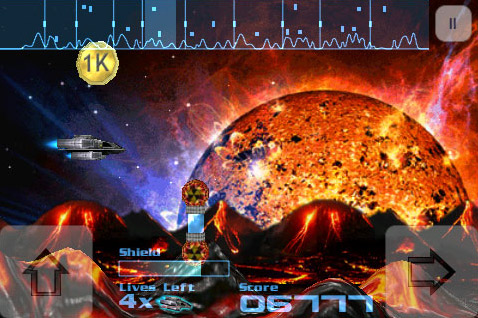 While SolarQuest is the most graphically impressive rendition of this formula I’ve seen, I must in all honesty say that despite all the bells and whistles, I actually find the simpler, graphically bland versions to be more entertaining. A very simple web version of the game gives you a taste of the gameplay.

Readers may also want to be aware that I encountered occasional graphical glitches in the game and a few unexpected quits.  The developer seems to be working on these issues, however.

I will call $2.99 a fair price for this title when the glitches are ironed out, and I’m guessing that will be soon.