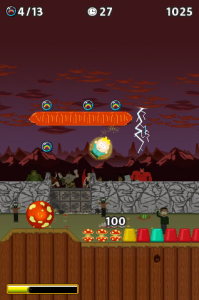 RealNetworks’ mobile gaming division has released their first game for the iPhone based on the popular South Park television show.

The game, South Park Imaginationland [App Store], is specifically based on a series of 3 episodes from the television show about a place where “all the beings created by human imagination reside".

I won’t get into the details of the plot of the television episodes, because honestly, I wasn’t aware of it prior to downloading this $9.99 game. In fact, it had been this unfamiliarity which had steered me clear of this title in the iTunes App store. I just didn’t have faith that a television show inspired gaming title would be any good. But I think I was wrong.

The hero of this game is a South Park character by the name of “Butters" and the mechanics of the game involves solving individual levels (of which there are over 60) of increasing difficulty. At the start of each level, Butters is launched into the air and each time he bounces against a wall or the ground, he accumulates “imagination powder". With this powder, you can propel yourself into the air with a simple swipe of your finger. The goal of each level is to pick up a number of Rainbows and land on the goal. The momentum of the initial launch, judicious use of imagination powder and strategically placed trampolines (depicted by mushrooms) are supposed to keep you moving. If you ever come to a dead stop before you complete your tasks, you’ve lost the level. Oh, and there’s a time limit.

Confused yet? Don’t be. The video should explain all (the yellow bar at the bottom is how much imagination powder you have to propel yourself)

The game is surprisingly fun and with its miniature levels, it certainly plays well on a mobile platform. I personally found the mechanics of the game very enjoyable and quickly made my way through many of the levels.

The main complaint I’ve seen from the few comments made by individuals is that the game is too short overall. While the game is said to be split up into 60+ “levels", they perhaps are more accurately described as about 15 distinct boards that are played 4 or 5 times with different goals and arrangements.

While the difficultly seems to rise during the 4 or 5 arrangements of the same board, when you start the next board it starts off very easy so you can quickly fly through many of the levels. So from a value perspective, some might not feel they are getting enough. However, from a gameplay perspective I think it’s one of the most engaging games I’ve played on the iPhone.