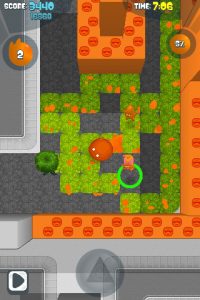 THQ (Toy Headquarters) is a massive worldwide game developer with a library of hundreds of titles and over $1 billion in revenue in 2007. Until now, they had made no announcements of iPhone support. THQ publishes games for multiple platforms including the Playstation 3, Nintendo Wii and Xbox 360.

The evil I.N.K.T. Corporation has declared “Color is a Crime!" and leeched Chroma City of all its beauty and interest. With no means to fight back, the citizens of Chroma City have been forced into a hypnotic state. Only the unlikely hero de Blob can defeat the hordes of tank battalions, speedy I.N.K.T. racers and elite Inky soldiers that have invaded his home. Flip, bounce and smash your way to launch a color revolution and save your city! 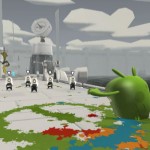 While the forthcoming Wii version of de Blob is set in a fully 3D world, the iPhone version is set in a semi-3D world featuring a fixed, top-down view with 3D buildings, but otherwise 2D graphics. The player controls de Blob as he moves about the depressing, grey landscape collecting colors and liberating the repressed.  de Blob is presented with certain goals to complete and is required to color certain buildings with specific colors that must sometimes be obtained through mixing (eg. red + yellow = orange), reminding me, in this respect, of Archer MacLean’s Mercury.

While not as graphically advanced as the forthcoming Wii version, de Blob for iPhone does feature unique, engaging gameplay.  But we have to wonder why THQ chose to bring a “dumbed down" version of the this game (presumably similar to the forthcoming DS version) to the iPhone rather than a more faithful conversion of the Wii original.  After all, the iPhone is closer to the Wii than the DS in capability.

A choice of touchscreen or accelerometer-based controls are offered within the game. The video below demonstrates the touch control which can obscure the gameplay at times. Meanwhile, the accelerometer control is flexible allowing you to calibrate the settings (screenshot) including choosing the neutral position and sensitivity.