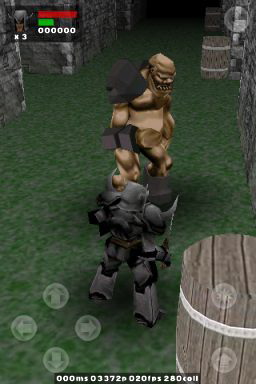 The latest in 3D iPhone gaming comes from developer Marco Giorgini. He has released a pre-alpha version of Kingdom Lores, a 3D fantasy adventure game based on an OpenGL ES rendering engine of his own design.

The game presents an over-the-shoulder view of the player’s avatar in the 3D game world.  On-screen controls are used to negotiate the terrain, do battle with enemies, collect treasure, etc.  Both portrait and landscape orientations are supported and on-screen indicators keep the player aware of current health levels, selected weapons, etc.

The author indicates that Kingom Lores is and will remain a free game but he is uncertain as to whether it will appear in the iTunes App Store due to the fact that he has no Mac and, as such, no access to the iPhone SDK (the game is being developed using Win Toolchain on the PC).

The game is not currently available through Installer but can be downloaded here and manually installed via FTP/OpenSSH on any jailbroken iPhone or iPod touch.