I know, this is a little late. As many readers will know from my last review of a free-to-play game, I’m a bit wary of these things of late. My immediate reaction to Marvel Snap (Free) was extremely positive, but I wanted to give it more time to make sure I understood its true nature. I believe I’ve got the gist of it now, so it’s time to review it. Then we’ll send it through the Quantum Realm back to before most of the people reading this played it, and we’ll be all set. I see this as an absolute win.

Marvel Snap is a really good card game. On the one hand, you could say that isn’t all that surprising. Ben Brode is one of the minds behind it, and you might remember him as the lead designer of Hearthstone. Four years ago he and some of his colleagues dipped out from Blizzard and set off to do their own thing, and that turned out to be Marvel Snap. The pedigree is there. These folks clearly know how to make a good card game, so of course they went and made another good card game.

But it’s not that simple, is it? Indeed, sometimes having a big success in your past is an albatross around your neck for your next thing. Trying to make another game in the same genre that doesn’t just repeat old beats and is still awesome? Pretty tricky. There are some similarities between Hearthstone and Marvel Snap, particularly in that they are both very easy to pick up and play, but Snap is largely doing its own thing and the fact that it works so well is a credit to the entire development team’s efforts.

So here’s the deal. You and your opponent each have a deck of twelve cards. No more, no less. A game typically lasts six turns, but it can last a little longer in some very specific circumstances. You start the game with three cards in your hand, and each turn you draw a card from your deck. On the first turn, you have one point of energy to use. On the second, two points, and so on. Each card costs a certain number of energy points to play, and has a certain number of power points. It may also have some additional abilities. We’ll come back to that in a bit.

The play field consists of three locations. One will be revealed on the first turn, the second on the second turn, and the third on the third turn. Your aim is to control at least two of these locations by the end of the sixth turn by having the most total power concentrated on them. These locations will also have their own properties that throw some wrenches into the works. Sometimes huge wrenches. You can play cards anywhere right from turn one, but the properties of the locations won’t kick in until they are revealed.

Okay, back to those abilities. Some cards are simple and just plunk down a certain amount of power for your energy. Sometimes this is what you want. A Hulk in the right place can often tie things up with a gamma-powered ribbon. But most of the cards have some extra abilities that kick in under various conditions, with the most common being Ongoing effects that keep on working while the card is in play, and On Reveal effects that activate when the card is flipped. There are some that kick in when the card is destroyed or discarded. There are some that are reactive to what your opponents do. Quite the variety, and the way they interact with each other and the properties of the locations makes for a massive number of possibilities.

You earn new cards in a few different ways. The primary means is by increasing your Collection Level. Playing matches gives you Boosters for cards in your collection, and when combined with some credits you can upgrade the rarity of your cards. This doesn’t change their gameplay properties, just how they look. But upgrading them will increase your Collection Level, and every time you raise a couple of levels you’ll get some kind of reward in return. Up until level 500 or so, you’ll get a new card every four to six levels. You can also get variants of cards you already own by spending Gold in the in-game shop, and they can be upgraded independently to further increase your Collection Level. Cards can also be earned as part of Season Passes, but it seems as though you’ll only get them if you get a Premium Pass.

Sigh, it’s almost time for the dirty talk. Just a little longer before we go into that, friends. There are also missions to clear, and they’ll refresh with a couple of new ones every couple of hours. While events are happening, there are also Season missions. Clearing standard missions rewards you with credits and Season experience. Clearing Season missions typically just nets you Season experience. That experience will help you work your way through the Season Pass, earning you credits, Gold, and Boosters along with some Premium rewards for those who paid for them.

Finally, there’s the matter of Season Rank. You’ll want this to be as high as possible by the end of the Season, as the higher it goes the more goodies you get. You increase this by winning matches, and this is indeed the main incentive for winning matches beyond your own pride. You’ll get boosters whether you win or lose. You’ll have to earn a set amount of points to increase your Rank level, and you’ll need to reach a certain Rank level to earn specific rewards. How many points do you earn for a win? That’s where one of the more ingenious mechanics comes in: the Snap.

It’s funny how a throwaway panel or two in the Infinity Gauntlet story has become such a cultural touchstone thanks to the massive success of Marvel’s movies. I can talk about Thanos Snaps and normal people know what I’m talking about! Weird world. Snapping in Marvel Snap doesn’t make half of all living things disappear into dust, though. It doesn’t even make Spider-Man tell Iron Man that he doesn’t feel so good. No, in this game it’s basically like raising in poker. Snapping doubles the stakes each time it’s done, putting more points on the line to be lost or won. Don’t think you can win? You can always retreat and only lose the current amount in the pot. It will double again at the end so you’ll always lose less by running than standing with a certain loss.

That means that in addition to the variables of deck creation, randomized locations, and the various ways cards interact, you also have the very human elements of bluffing and confidence in play. At lower levels you probably won’t care about the lost points, but as you climb the ranks the sheer tension post-snapping is unreal. It adds genuine stakes without actually costing you real money, and that’s a hard thing to capture in a game like this. With all the factors in play, last minute turn-arounds can and do happen, so you’re never completely safe no matter how far ahead you think you are. Snapping takes guts, and you’ll often pay for your bravado.

Okay, time for the dirty talk. Nothing in this world is free, after all. How does Marvel Snap monetize and where does the pinch come in? Perhaps unsurprisingly given this development team’s past work, this is a very comfortable game to play for free for a very long time. You won’t be able to get every card and you’ll eventually run short on credits to upgrade card rarities, but the trickle of new cards and resources is steady enough to keep it fun. You will eventually hit a point where the new cards stop coming, and things get less enjoyable then. It’s very, very far into the game but I suspect most steady players will hit it within a couple of months. 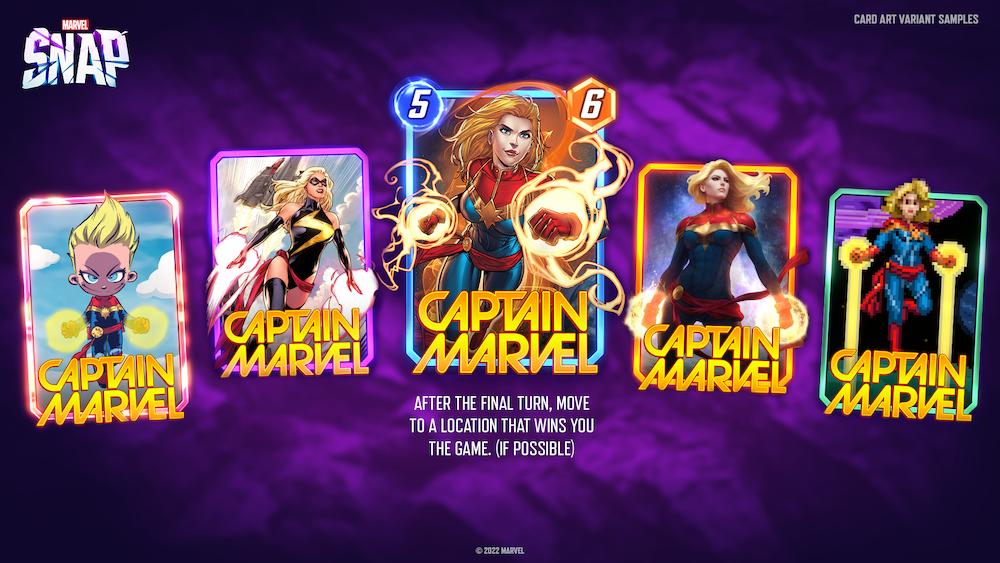 Does that affect your viability in matches? So far, not really. You can make excellent decks with the cards you’ll earn for free, and I suppose there’s nothing stopping the developers from adding some of the Premium cards to the free pool after some time has passed. Could new cards mess with this fragile balance of power? Absolutely. This review is but a snapshot in time. But for now, I think a free player can compete perfectly well with those who are paying out.

And that brings us to how you can pay out, should you choose to. First, you can buy Gold in various amounts. Gold may not seem immediately important when you start the game but the variant cards it can buy helps you boost your Collection Level and as you start tapping out the easy ways to do that, it becomes vital. There are ways to get Gold for free but they are definitely slow. The other way you can spend money is through the Premium Season Pass. So far it looks like they’ll cost about ten bucks and give you a few exclusive cards, lots of boosters, and other extras. There’s also a Welcome Pack that gives you some extra resources and a nice Captain America card for a few bucks.

I won’t say I won’t be enticed by the exclusive cards depending on what they are, but taking a good, sober look at Marvel Snap as it stands, I think the monetization isn’t too bad here. It helps that it’s a card game and thus doesn’t really have a story or ending to put off until you grind or pay. Nothing is too egregiously priced, and I think you can still be competitive even if you don’t pay. As free-to-play stuff goes, you can’t ask for much more than that. Will I fall off the game when I get tired of the plateau? I suppose we’ll cross that Bifrost when we get to it.

Marvel Snap is an incredibly well-designed game. It’s perfectly suited to mobile thanks to how quickly the matches resolve, but the level of strategy is satisfyingly deep. The missions incentivize you to mix things up, and the steady stream of new cards ensures you’ll have plenty of options to choose from for such endeavors. The monetization is relatively low-pressure and the plateau point for free players is far enough down the road that it’s hard to call it unfair. I also love how well the cards represent the various heroes and villains in such simple terms, with the locations doing the same. The Snap mechanic is the brilliant cherry on top. A fantastic title, and one I can’t seem to leave alone.