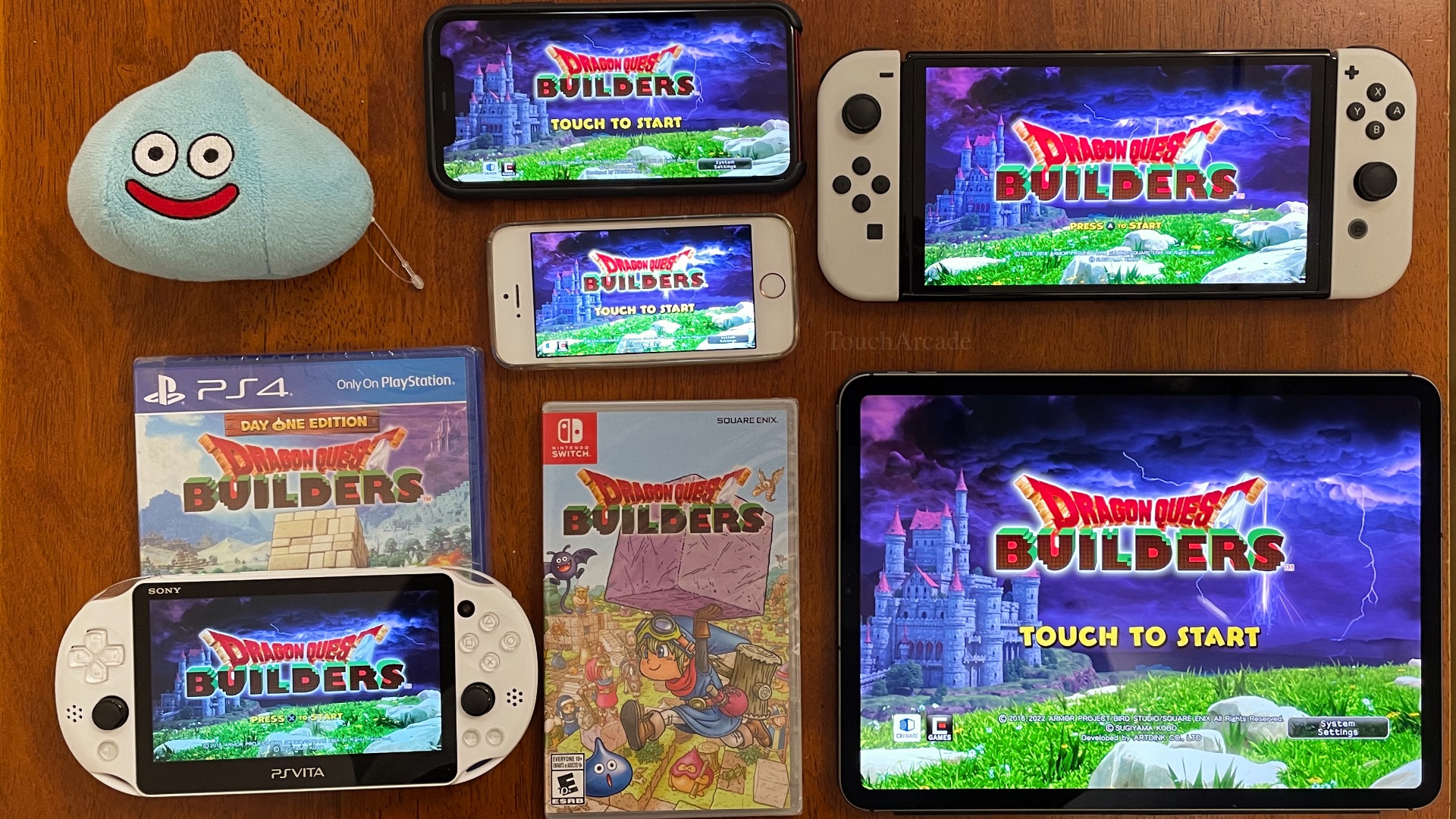 Structurally Dragon Quest Builders is a bit weird initially. Progression is reset to some degree in each chapter location. You aren’t redoing everything again like the first chapter, but it isn’t a continuous grand adventure like you’d expect in a Dragon Quest game. The chapters here are massive, and I honestly was pleased with the game just after the first chapter back on PS4, with how much time I put into it. This isn’t a huge issue, but you’re better off knowing this before jumping in and spending a lot of time thinking everything you build here will carry into the next chapter which is essentially a new settlement map. I’d also recommend making a different manual save per chapter for this reason.

Let’s get this out of the way. Dragon Quest Builders has basically no controller support on iOS. You can pair a controller and use the analog stick to move, but the only other button that works is the options button on a PS4/PS5 controller that is mapped to jump. Nothing else on the controller works. There is some silver lining though. Square Enix has done a fantastic job with the touch controls on iPhone specifically. On iPad, they aren’t as good, but I will get to the iPad issues in a bit. The combination of great touch controls for iPhone and the new features added make this the best version of the original Dragon Quest Builders, with a few big caveats.

Having played Dragon Quest Builders on PS4, PS Vita, and Nintendo Switch before, I was excited to revisit it on iOS to see how it holds up over half a decade after debuting in the West, how it plays on a touchscreen, and compare it on different platforms and iOS devices as usual. With Square Enix premium releases on mobile, it feels like the company throws darts at a board to decide which basic features to skip for each release. The Final Fantasy Pixel Remasters still lacking controller support on mobile is the most recent example of this. Dragon Quest Builders on iOS has basically no controller support as mentioned above, but the real stinger is no iCloud save support. For a deep game like this where you will invest dozens of hours at minimum, having no way to backup your progress, let alone sync it to another iOS device, is awful.

Barring those issues, Square Enix has brought some useful features to Dragon Quest Builders on iOS. You can save anywhere versus being limited in the console version. The lack of save anywhere on Switch made it hard to properly play it on the go in short bursts. In addition to that, the mobile version includes an undo button with a decent history of your actions that you can undo. It also has support for tapping the screen to destroy and place blocks. These are amazing additions that make playing the original console versions a chore. I’ve revisited those to compare with the iPhone and iPad release I have, and it really sticks out.

Barring the new features, Square Enix also has some paid DLC available for Dragon Quest Builders on iOS and Android. These are mainly for the creative mode and not for the main story chapters. Once you unlock Terra Incognita in the game after a bit of playing, you can use this creative mode to build more on over time with new recipe unlocks as you finish more of the main story. The DLC on mobile includes new content only for Terra Incognita mode including an all-in-one bundle that makes a lot more sense to buy than individual items going by the pricing.

So with basically no controller support and no cloud save backup, is Dragon Quest Builders still worth it on iOS? The answer is yes, if you’re playing it on a newer iPhone. I tested it on iPhone SE (the original), iPhone 7 Plus, iPhone 12, and iPhone 11. On the iPhone 11 and 12, it runs really well on high, but it has heating issues. On medium graphics, it is more or less fine, while the iPhone 7 Plus and SE struggled to maintain close to 60fps (something the Switch version rarely did properly) unless I used low with the SE struggling there as well.

In its current state, Dragon Quest Builders feels unoptimized with its power consumption causing devices to get warm rather quickly. This causes the screen to dim and performance to tank. This wouldn’t be as much of an issue if the lower graphics options actually had the interface and text look crisp at least. On setting the graphics to low, even the text is blurry. Hopefully an update (yes I can hear you all laughing given this is a Square Enix game on mobile) can address this bit because Dragon Quest Builders is no doubt going to be super successful on mobile in Japan at least. 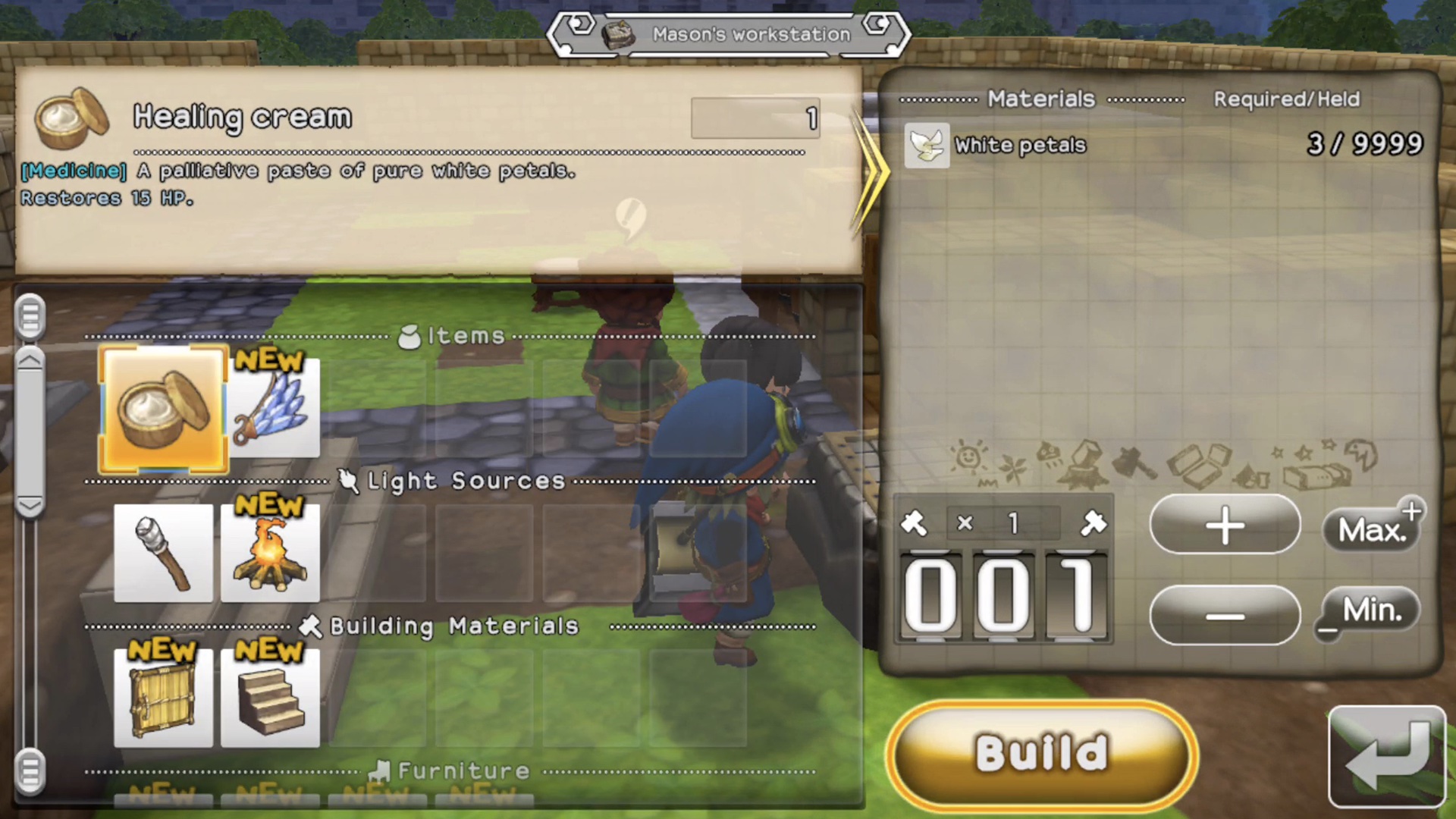 If you are considering Dragon Quest Builders for playing on iPad, you might want to wait. In its current state, the game seems to have a lot of performance issues even on my iPad Pro (2020). For reference, my iPhone 11 with graphics at high runs the game better than the iPad Pro (2020) at medium. The iPad Air 2 felt like playing it on Switch at the high setting. The other issue is the controls have no customization with placement that I could find making it not feel as nice or intuitive depending on how you hold your iPad and its model. Playing at low wouldn’t be a problem if it didn’t make the text and interface also low resolution as mentioned above.

Now the question is, if you don’t care about the new features and only want to know which version of Dragon Quest Builders looks and runs best, the answer is a modern iPhone version. I don’t have access to the M1 iPad to compare, but right now the iPhone version runs as good as the PS4 version on PS5. One thing to note is that the PS4 version has a few performance issues relating to frame pacing on PS4 and PS4 Pro only in the localized release for North America and Europe which never got fixed. These issues were not present in the Japanese version. On Switch, the game runs at an unlocked frame rate at all times and never feels smooth thanks to its frame pacing issues that make it feel inconsistent. On PS Vita, the game targets a lower frame and is not really worth your time compared to other versions. 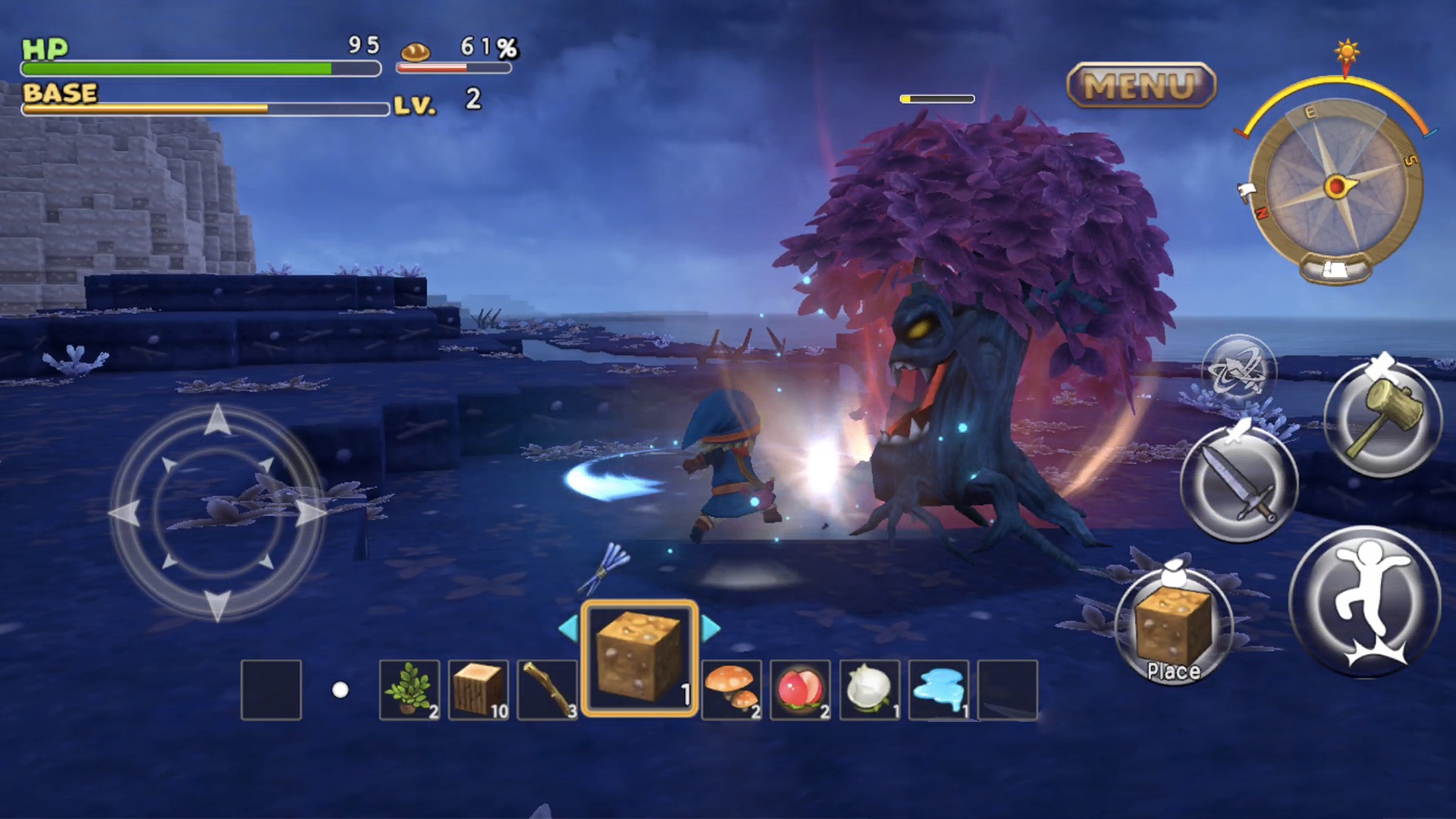 Barring cloud save support which is essential, I’d love to see proper controller support added since this game was literally only available on consoles until the mobile version. Square Enix also needs to push out an update soon to address the heating / power consumption issues and iPad version performance. This has the potential to be one of the best premium games on iOS, but some of these issues need to be addressed as soon as possible.

In its current state, Dragon Quest Builders is a fantastic game, but one I can only recommend with some big caveats and if you will stick to playing it on a modern iPhone. If you care about cloud saves, it isn’t here. Controller support is basically absent as well. If you’re considering it on a newer iPhone, it is amazing. On iPad, for some reason it runs a lot worse than I expected even on my iPad Pro (2020) and feels almost as bad as the Switch version does on an older iPad Pro with inconsistent performance. Square Enix has done a fantastic job with the touch controls and the new quality of life features making this the best version of the game on paper, but the power consumption issues need addressing. 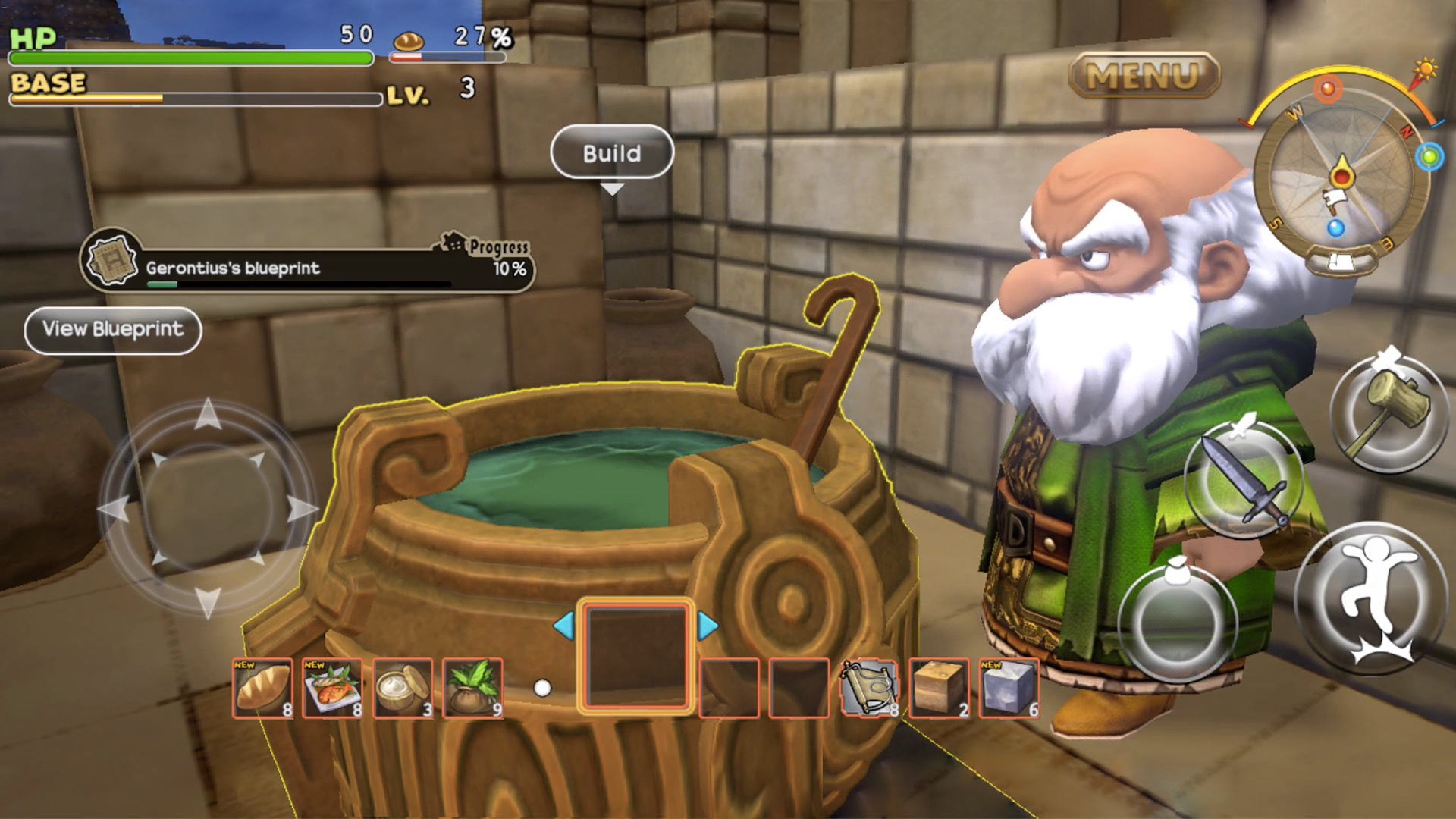 While Dragon Quest Builders will not replace Dragon Quest Builders 2 for me, the iOS version of the original is now the best way to experience it even with the issues mentioned if you play on a newer iPhone. Considering Dragon Quest Builders is still priced at $59.99 on PS4 and $49.99 on Nintendo Switch after all these years, the asking price on mobile doesn’t seem as bad as it is, but I will never fault anyone for being hesitant to support Square Enix’s pricing on mobile given how bad the post-launch support can get with future iOS and iPadOS releases. This has the potential to be a 5/5 game on mobile, but Square Enix being Square Enix has dragged it down holding it back from being as good as it can be on iOS and Android. Hopefully Dragon Quest Builders 2 does eventually come to mobile and have a much better initial release.