We are big fans of Game Stew around these parts, and have been for many years. Their slot machine RPG Tower of Fortune is what got us hooked way back when, but they’ve developed a reputation of releasing all kinds of weird, quirky, retro-inspired games over the years that mash up genres in interesting ways. Their latest game is called Kaiju Attack, a blend of match-and-merge gameplay like you’d find in Triple Town or Threes! with some surprisingly tactical combat with gigantic monsters. I feel like I’ve probably said these words before, but, this might be my favorite Game Stew game yet.

Here are the basics. There are 8 different cities being attacked by their own giant monster, and you’ll pick one from a map to defend. The game takes place on a 5×5 grid, with that particular city’s kaiju roaming around the board. As the player you have 3 different resources to manage represented as blocks on the grid: Buildings create energy, humans represent a city’s population and add to your health bar, and planes or tanks are your offense and will cause damage to the kaiju.

Rounds are essentially turn-based. You get a Deploy phase to set up your matches before everything is put into motion in the Combat phase. During the Combat phase any humans on your board will add to your HP, any buildings will add to your Energy count, and then that same Energy is used to fire off the cannon or plane attacks. I’m probably making it sound more complicated than it is, but it did take a few games for me to finally start to click with the mechanics and start formulating some better strategies.

As mentioned this is a match-and-merge game. For example, match 3 single building tiles horizontally or vertically and they’ll merge into 1 double building. Match 3 double buildings to create a triple building, and so on. You can do this with the tank tiles and the human tiles too, and every level of merge makes a tile even stronger. So you’ll gain more resources from a double version of a tile compared to a single version of a tile. It’s also worth pointing out, since it isn’t super clear at first, that you can swap a tile with any other tile on the board, not just tiles that are right next to each other like a typical matching game. Your basic goal is to strategically make matches and bulk up your resources in preparation for each Combat phase.

During the Combat phase, the kaiju also gets its turn to make some moves. This generally means roaming around the board a bit and wiping out a bunch of your tiles. Naturally, this also does damage to you and depletes your HP bar. Victory is pretty simple: Deplete the kaiju’s HP bar before it depletes yours. Of course that’s much easier said than done, as your best laid plans on the game board can all come crashing down once that kaiju starts wrecking your tiles. You also really need to balance your resources as opposed to just doing the biggest and best matches. I often found myself chasing big merges that would result in me having too much of one resource and not enough of the other, making me easy fodder for the kaiju. 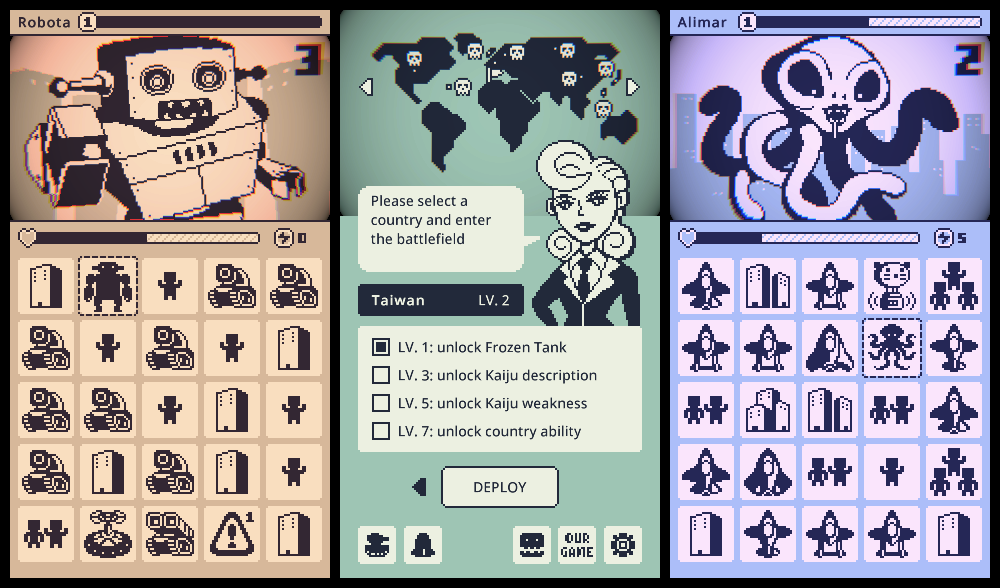 This all comes together to make for a much more tactical game than you might think from first glance. Each of the 8 cities has 7 levels of difficulty to conquer, and once you’ve conquered level 7 of every city you’ll unlock a special 9th city. Also every round results in money earned, as well as money taken away for things like how many citizen, building, and tank or plane tiles you let get destroyed. The resulting earnings can then be used to upgrade your Army, adding special modifiers and buffs to the tanks and planes in the game. There are also 8 Secret Weapons you can unlock and upgrade that each offer another type of offense to your arsenal in taking down the kaiju.

Kaiju Attack is a tactical turn-based strategy game dressed up as a match-3. It’s also, as far as I can remember, the first Game Stew game with no IAP. It’s just a straight up paid title. I don’t really love tactical strategy games, but Kaiju Attack has a special blend of mechanics and approachability that has really sucked me in. It’s like you get all the depth of a bigger strategy game experience, but condensed down into something that’s simple to play on mobile like a matching game. It really is a clever mix of mechanics and I think anyone looking for a new strategy game to conquer won’t regret dumping a few bucks into checking this one out.