Some games are good. Really good, even, and you know you’ll play them for hours and hours. Other games maybe need a bit of work, a bit of spit & polish, and they could be good. Then there are some games I really want to love and enjoy and recommend but, for one reason or another, I just… can’t. Dungeon of the Endless ($7.99) is one of those. Not because it’s bad, but because it just… doesn’t capture my attention, can’t keep me coming back for run after run, even after months of not playing. It’s not immediately obvious why, either—the art is gorgeous, the soundtrack is good, and the minute to minute gameplay is quite enjoyable too. So what is it? Why, despite owning the game on three different platforms and trying to get into it dozens of times, does it consistently fail to draw me in, push me to really dig in to strategies, and finally beat the game? The answer, I’ve come to find, is simple: The post-run reward loop that gets you to come back for one more floor, to experiment with that thing you just unlocked, or to see if tweaking your strategy just so makes the difference, just… isn’t there.

Now, to backtrack, Dungeon of the Endless, if this is the first you’ve heard of it, is a roguelike tower defense. Players choose a team of two prisoners and an escape pod, and must ascend through twelve floors of a dungeon filled with a variety of overly enthusiastic defense forces, as well as other prisoners (who can be recruited), and merchants (who have a variety of goods to trade). Fortunately, in some glimmer of insight, someone designed the escape pods to include blueprints for both resource generators and turrets, and a mobile power supply to get ’em running. In addition (as if that wasn’t enough), the prisoners themselves are quite capable fighters, and some are even able to operate or repair the buildings as well. 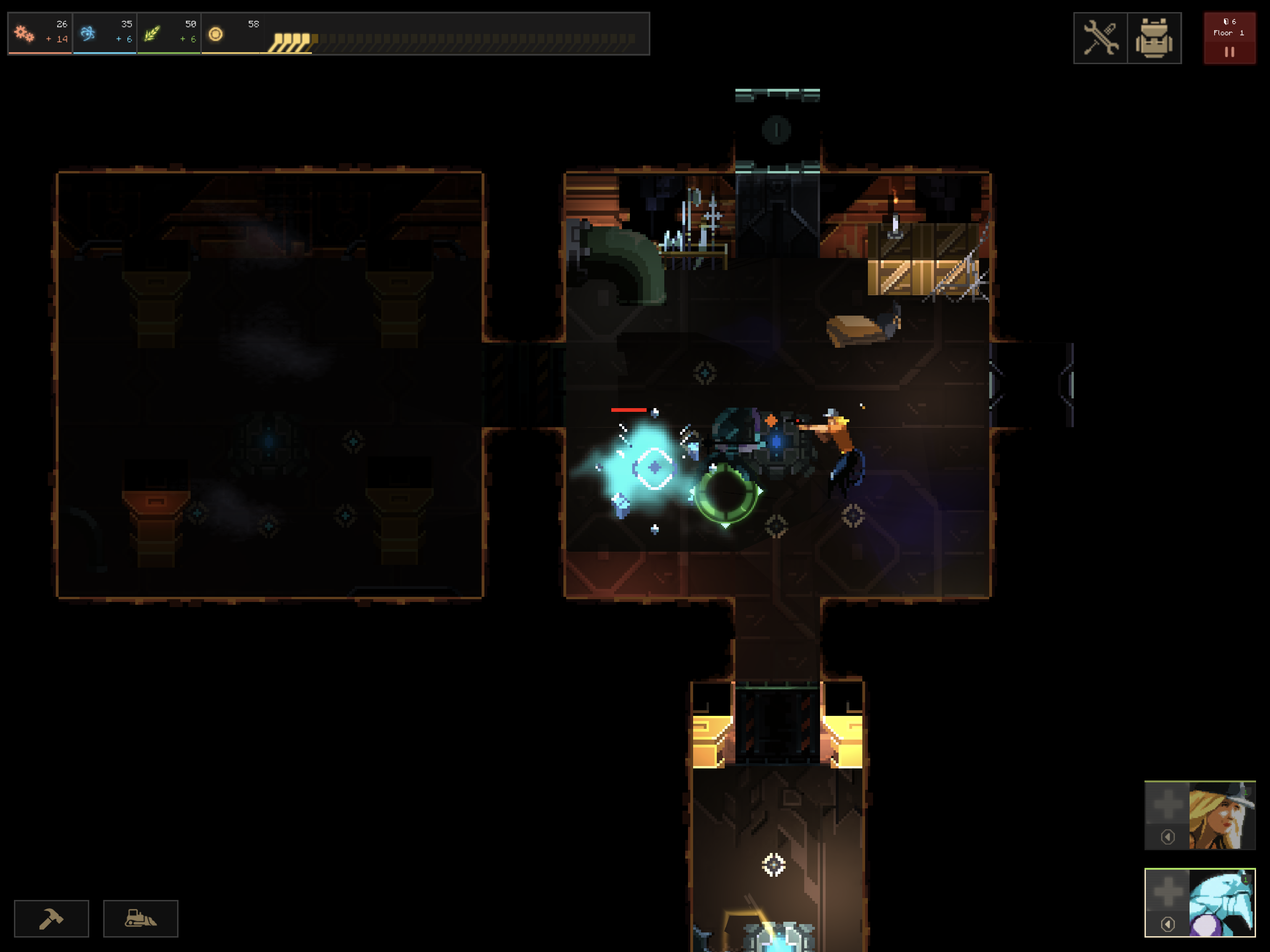 Mixing and matching prisoner skillsets, figuring out how to maximise their effect, as well as managing resources—industry, science, food, as well as dust (power)—are the fundamentals of climbing floors. Some prisoners are great fighters, ranged or melee, while others are much more suited to assisting from the back with group buffs, or simply boosting resource production. While, strategically speaking, managing these characters will take up the bulk of a player’s attention (with opening doors, tracking their health pools, using abilities, and making sure they aren’t getting swarmed), they are actually only the second most important part of most strategies. More important by far, at least in terms of surviving once you grab the crystal, are buildings—or modules.

Modules are what make Dungeon of the Endless a tower defense. They are the resource generators, the defense systems, and a host of other miscellaneous constructs that require industry to build, power to operate, and the right kind of room to support them. They make up the backbone or, if you prefer, the supply train, of your climb to the surface. Figuring out the best rooms to fortify, which rooms are safe enough for generators, and which rooms are best powered and left alone, takes a bit of practice and a lot of error, but makes a big difference not only in clearing a floor, but surviving the onslaught when you try to leave. See, after you grab the crystal, enemies spawn in every unpowered, unoccupied room… constantly. Taking the time to set up a well defended escape route can mean the difference between a clean exit and the end of a run. 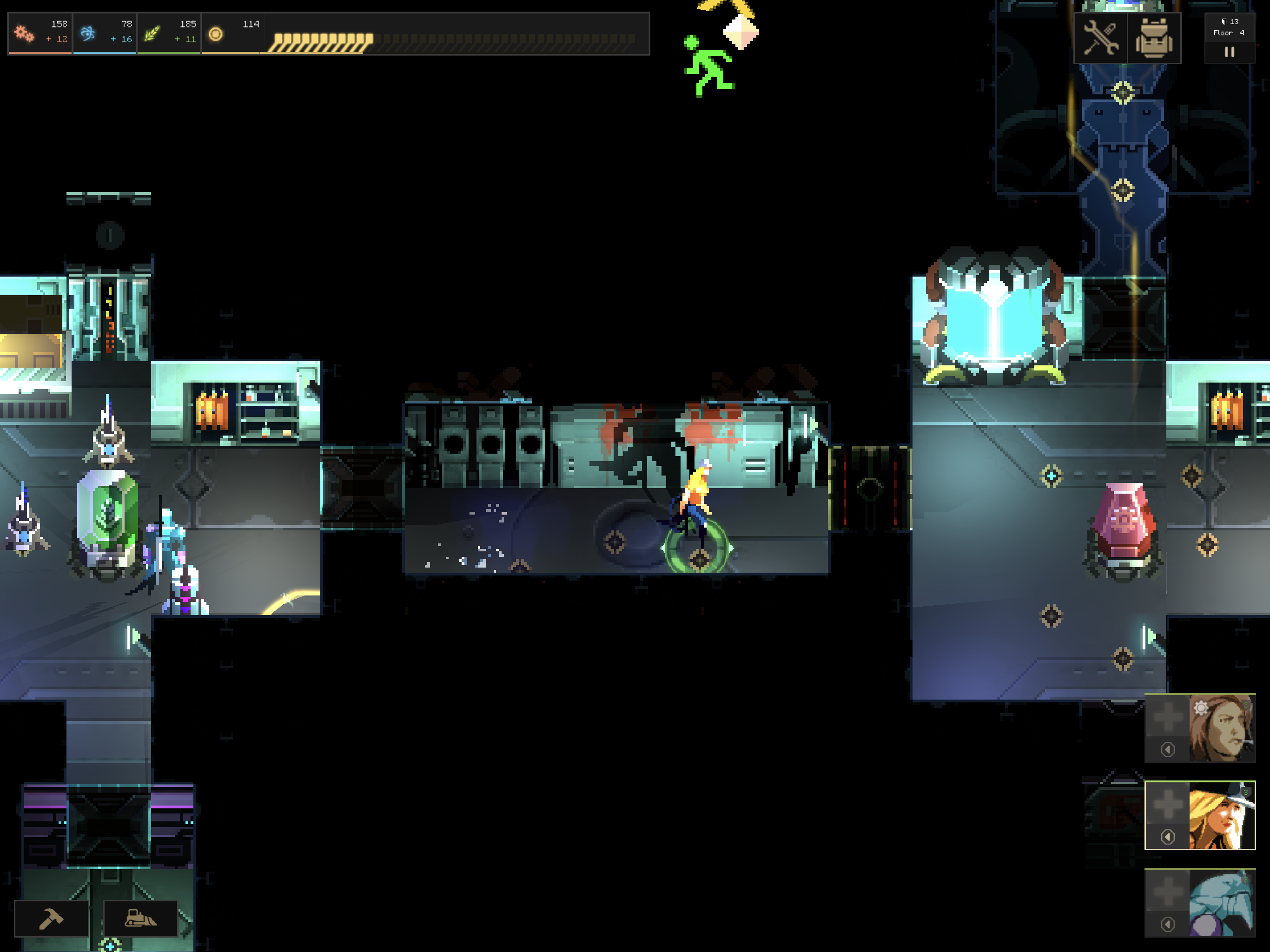 It sounds like a lot to manage, and it is, but it isn’t cumbersome in play. Not after the first few runs, anyway. There’s a rather steep learning curve as the tutorial offers only the barest guidance, leaving as much as possible for players to discover on their own. Which is fine, preferable, even. Sometimes. When things that probably could have (and should have) been covered in the tutorial crop up and throw a wrench in the works, though, it’s a royal pain. Despite that, I wouldn’t have it any other way, as the process of discovering interactions, figuring things out, and even googling for meta information, is all part of a roguelike’s charm.

Now, the question is whether it’s better on iOS or… well, anything else. The answer… isn’t actually that clear. It’s a good port, and it plays very well on both iPhone and iPad. The UI is well designed, and the tower defense gameplay lends itself well to a touchscreen. The only real downside, I think, is that it doesn’t have the hotkeys of the PC version, but that isn’t much of a downside really. The other two platforms—console and Switch—each have their own benefits, but the only real competitor is the Switch and, between the two, iOS has the Switch beat as far as I’m concerned. The iPhone is just as portable if not more portable than the Switch, and the iPad has a bigger screen. The only thing it doesn’t have, as far as I can tell, is controller support. That, however, can easily be patched in later. 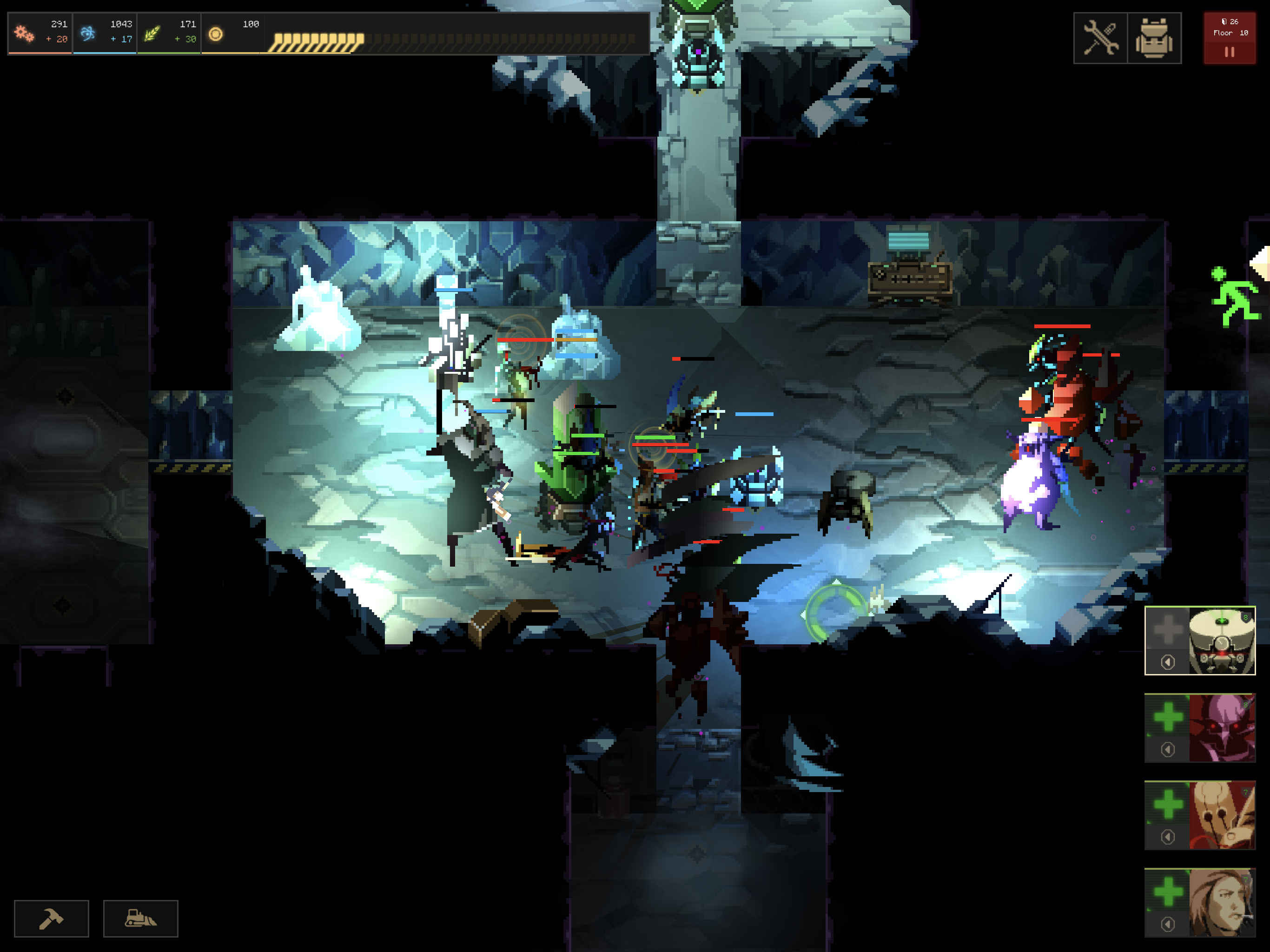 While the gameplay may be the primary draw and how people evaluate a game, the best part of Dungeon of the Endless in my opinion is, bar none, the art. Simply put, it’s gorgeous. Each panel tells a story, drawing its audience a little deeper into the atmosphere and world of the Endless, pushing them to engage and wonder as to its place in the broader world. While that world isn’t ever fully fleshed out (by design, mind; a full world filled with stories has few mysteries), it is a fascinating place to dwell for a time. However, the art I so appreciate is not fully realised in gameplay, instead used to illustrate backstories, loading screens, and concept art. In game, pixel art is used instead—pixel art that, I must say, is also beautiful—which is somewhat disappointing. Even though it is beautiful, charming, and in line with the genre, it just doesn’t have quite the same flair, the same mystique, as the illustrations.

While I love the art, and I enjoy playing the game… it has flaws. This isn’t the first time I’ve played it, and I doubt it will be the last, but I still can’t sit and play it like I do Dead Cells. The reason, I’ve come to realise, is because it doesn’t have the same feedback loop when you fail a run. When you lose (and you will, many times), that’s it. There usually aren’t new prisoners to start with, or new escape pods that give a run a unique twist, or new weapons, or upgrades or, or, or… or anything. You just start over with two prisoners and the experience you’ve gained as a player, and try again. It’s brutal, and I appreciate it for that, but it’s also very unrewarding to keep playing, trying again and again, and so rarely getting rewarded for your efforts. It’s Dungeon of the Endless’s greatest flaw, and it’s why, despite coming back again and again, I can’t play it for more than three or four runs at a time.

I like Dungeon of the Endless. I enjoy the strategy of managing characters, clearing the dungeon room by room, floor by floor; figuring out which resources are most important this floor, which rooms to power and which to reinforce; and I love the art and sound design. It’s all very well done, and makes for a very enjoyable experience. Because of that, I want to give it a whole hearted recommendation for anyone and everyone who enjoys roguelikes and tower defenses and strategy games. I wish I could—but I can’t. It’s missing something and, without it, I don’t think it is as replayable as it could, maybe even should, be. Without it, it’s a hard roguelike to get into.

To be clear, Dungeon of the Endless is beautiful, fun, and crunchy enough to keep you on your toes. It is also brutally punishing, and utterly impenetrable for anyone who isn’t willing to keep trying after spending hours getting to the brink of success, and failing with little to nothing to show for it because of something entirely out of your control. If that doesn’t deter you… give it a shot. It may be your kind of game; and even if it isn’t, it may still be worth it, in the same way it was for me.