Dracula. A classic book of desire, and triumph over a great evil. It is not, however, the focus of this review. No, it is merely the inspiration for a board game, one of mystery and deduction, predator and prey. A game that will, without doubt, find its audience with a digital port. What game, you wonder? Why, dear reader mine, none but the Fury of Dracula ($2.99).

Although incredibly hard to find a physical edition, Fury of Dracula has neverthless made its way into the hands of some remarkable entertainers, who first brought it to my attention. At the time, I was interested only in playing it physically at some point in the future. I have but little space for a collection, you see, and even a game as interesting as one about hunting vampires and subjugating Europe as Dracula just doesn’t make the cut. Alas. Fortunately, it has debuted on iOS, a platform much more convenient for the casual board game collector. So, with collars high, and all mirrors safely stowed, I embark on a ride to 19th century Europe.

Playable by two to five people (or even just one, if you don’t mind playing against AI), four players will be vampire hunters, and the fifth plays Dracula. Individually, hunters are far too weak to face Dracula directly; however, unlike Dracula, they can acquire an arsenal of weapons, tools for combatting the undead, and allies in pursuit of the monster… but they’re on a clock. If they don’t find what they need, and fast, Dracula’s shadow will have spread too far to stop. Dracula, on the other hand, has all the time in the world—literally. While Professor Van Helsing and his cohort must slay Dracula to win, Dracula need only evade his pursuers long enough for a handful of his many plots to flower.

Speaking of Europe, the gameboard encompasses England, as well as most of continental Europe from the English Channel to the Black Sea. Movement will be quite familiar to anyone who has played Scotland Yard (or perhaps even Ticket to Ride), and involves roads, railways, or sea. Hunters can travel by any of the three, requiring only a railway ticket to board a train. Dracula, on the other hand, can travel only by road or sea, with a hefty blood price to board a ship (trains, he says, are far too public). Additionally, while the human players may take action both during the day and at night (albeit with greater risk at night), Dracula may only conduct his affairs during the deepest depths of night. 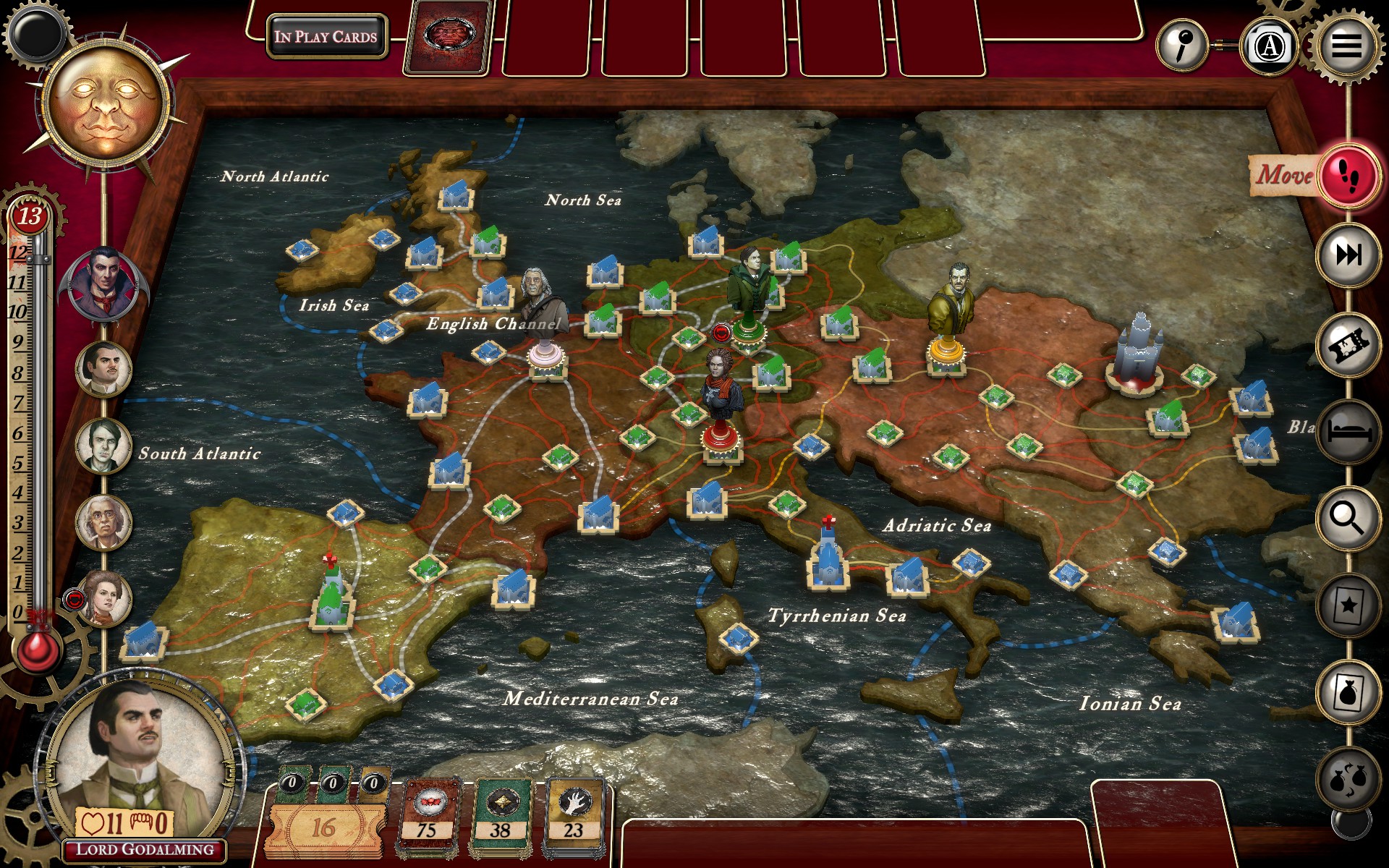 Finally, should any hunters find Dracula or his spawn in a city, or should they find a hunter, they will immediately engage in combat. Combat plays out for up to six rounds, during which each participant selects a card to use and resolve. The more cards the hunters have available, the better their odds, as each of their cards can cancel a number of Dracula’s, in addition to having other special effects. However, should a hunter be reduced to zero health, they are defeated and moved to the nearest hospital. If instead they are bitten… well, better they be defeated.

While that’s a general look at the mechanics, to actually play it is something else. To play Fury of Dracula is to experience a delightful blend of RPG and social deduction, with a dash of strategy and gothic brooding. Players are invited to enter a world where there is a great evil, and they—and only they—can stop it. Must stop it, even, lest all they know succumb to it. Or they can be the great evil, and sow terror and evil across the land in pursuit of thralls and a wealth of food. Either way, the atmosphere—the feel of the game in progress, should the players deign to indulge it, is precisely that which one feels reading Dracula. It’s perfect. 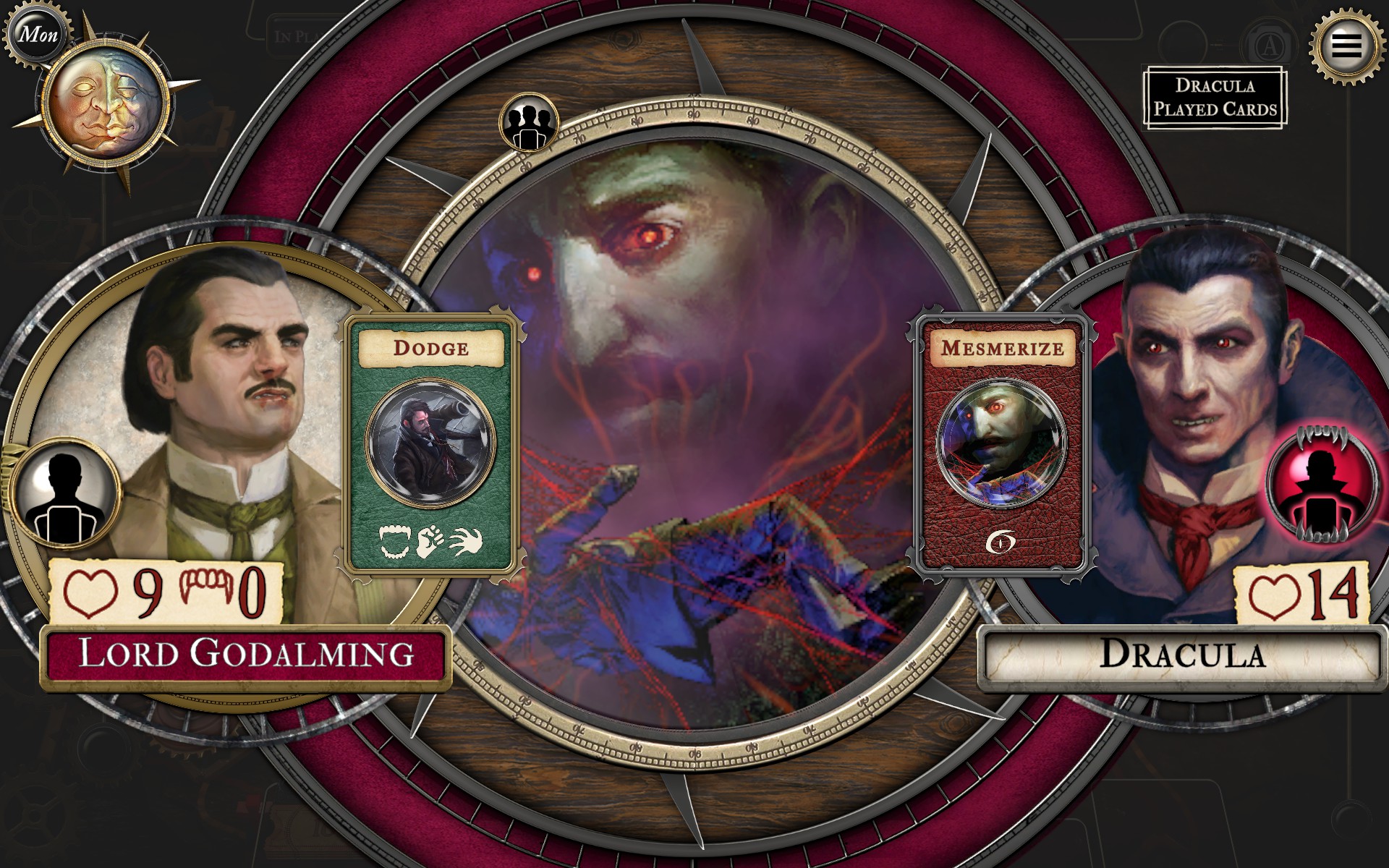 As good of an experience as it is, though, it is not without flaws. Most notable to folks just picking it up, and not exactly unexpectedly, it isn’t a great game to play solo. The computer isn’t good for much beyond providing a patient opponent while you learn the general flow of the game, and maybe an occasional bout to fill some time. It’s really best played with couple friends at a coffee shop, or with family after dinner. Or, I suppose, you could hop into an online game, although I was never actually able to see that in action.

More material to gameplay, map movement is not only painful, it’s downright impossible. There are three (well, four, but functionally three) degrees of zoom, all focusing on whichever token is presently taking a turn. There is no way to get a look at other cities, or see where your allies are in relation to where you think Dracula may be, or even just pan around the map. It’s really quite a problem, at times, when a card tells you to choose where to put a blockade, or an obstacle, or where to send a hunter, and you can’t even see all your options. 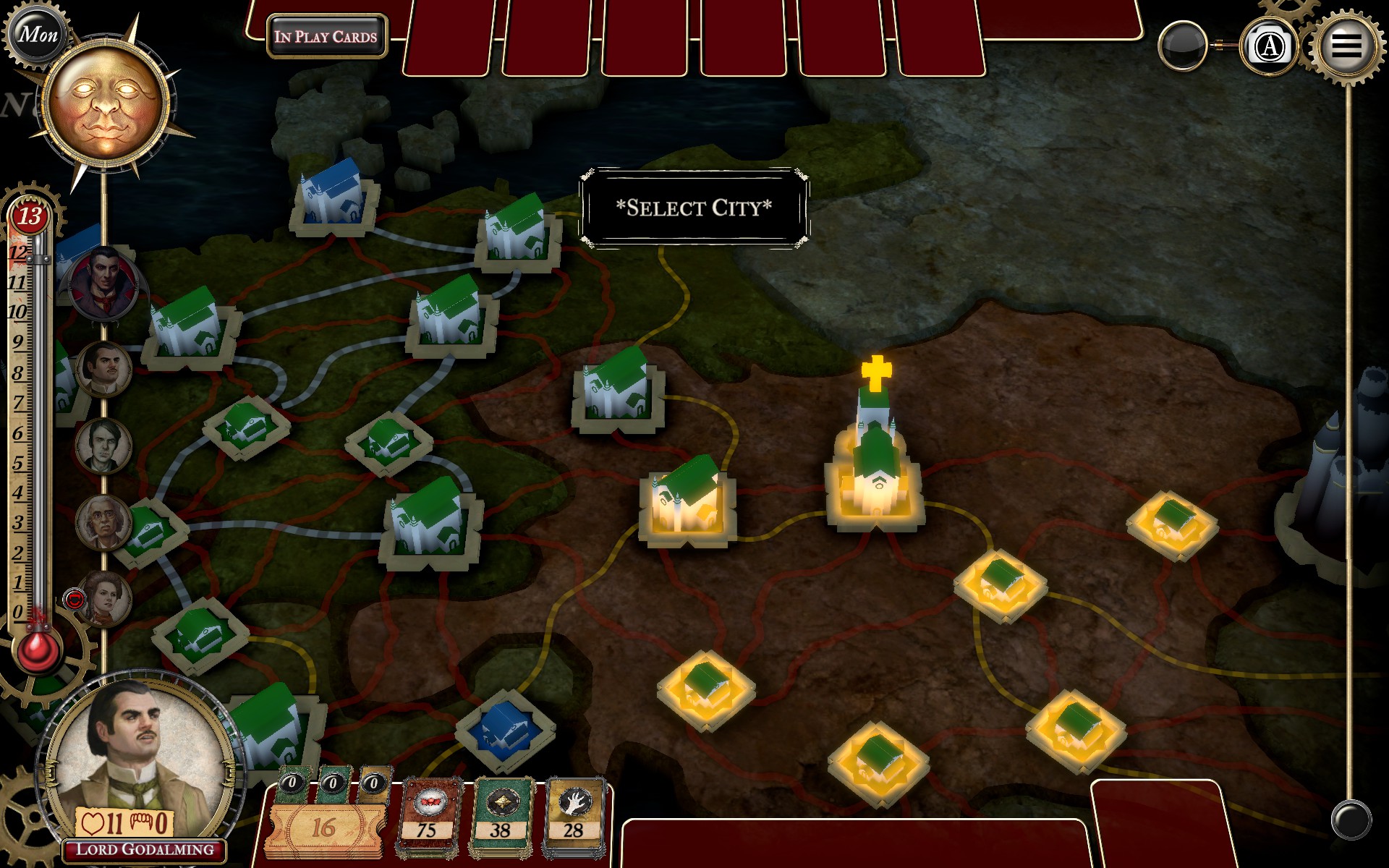 Despite its shortcomings, iOS is probably the best place to play Fury of Dracula. Rather than being tethered to computer for game night, you can pass around the iPad, or play on phones. Everyone has those, right? What about playing it physically, you ask? Well, the less said about trying to hunt down a physical copy, the better. Finding a copy isn’t easy, and even if you can find one on Amazon or the like, it isn’t cheap (try finding a copy for under $200—I’ll wait), so $5 for the mobile port is an absolute steal.

As for whether or not it’s worth buying… for somone who enjoys board games, who has ample opportunity to play with friends or family who also enjoy board games, it’s a definite yes. You’ll get several hours of fun out of it at the very least. For someone looking for a game to pick up who may or may not be able to find two or three or four other players? Probably not. This isn’t a single player game, and while it can be played online, it is really best played in person. But hey, it’s $5. If you’re unsure, it’s an absolute bargain for a decent port of a classic game. Give it a shot!